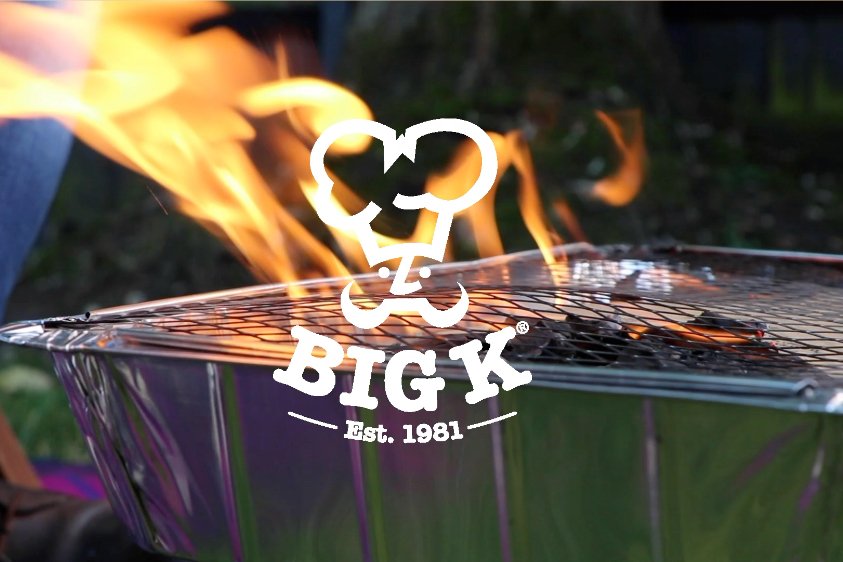 As Theo says, “you don’t need a fancy barbecue to have some great food.” We hooked him up with one of our party size disposable instant all in one BBQs, and let him crack on. Theo came up with a super easy but delicious BBQ feast of salt crusted sea bream with caramelised pineapple for dessert. This recipe really only takes a few minutes to prepare, and you don’t need to worry about having a whole kitchen full of herbs, either. Watch the full video below to check out Theo’s neat tip on how to season the sea bream if you’re cooking outdoors.

As we are already talking about disposable barbecues, we’d love to tell you even more about ours – yes we have some serious product pride. Big K’s All in One Party BBQ FSC are party sized disposable instant light barbecues, manufactured by Big K in our own production facility. Unlike other disposables, we pack ours with an ultra deep foil tray, so you get a proper amount of instant light lumpwood charcoal and improved performance These party sized BBQs have plenty of space to cook on, and they light with a single match. Get up to an hour of cook time too, and, as Theo says, “there’s ferocious heat on this, it’s impressive for a disposable.” And, these great performing disposables are FSC certified, so they’re sustainably produced using responsibly sourced wood.

Get a disposable barbecue that won’t let you down when it counts. Find out more about Big K’s All in One Party BBQ FSC.

Theo Michaels is a published author, celebrity chef, and currently a full-time Executive Chef. After reaching the semi-final heats on UK Masterchef 2014, Theo went on to create a sell-out pop up restaurant and spend 3 years as a private chef, alongside appearances on ITV’s This Morning, The Food Network and BBC Radio. Find out more about Theo on his website, check out his new cookbook Orexi, or follow him on Instagram.