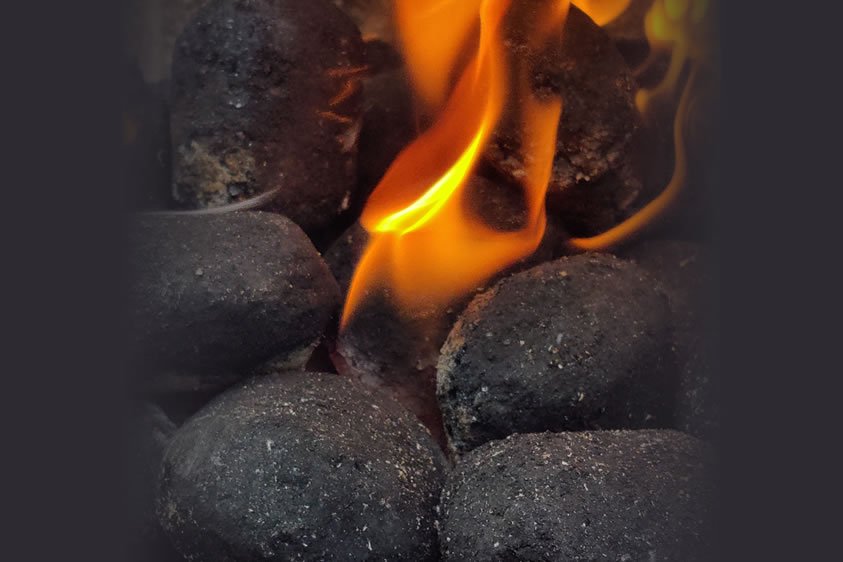 The world of fuel is packed full of information. It can be so easy to get lost in the details, making it harder to make good decisions. Here at Big K, we want to make sure you’ve always got the best information possible to make the right choice on the fuel you use. We believe that everyone should have the perfect fire in their home, whether you only light your fire a few evenings in the summer or are burning all year long.

So, to make your research super easy, here’s our guide to smokeless coal. While some of you might be very familiar with smokeless coal, especially if you live in a smoke control area, many people haven’t considered this kind of fuel. But, smokeless coal might actually be the perfect fuel for you, even if you don’t live in a smokeless neighbourhood. Time to decipher the facts from the hype and remove the smoke and mirrors…quite literally.

What is smokeless coal made from?

First things first, let’s dig into what smokeless coal is and how it’s made. The key difference between regular coal and smokeless coal is that smokeless coal is formed from an anthracite base with fewer volatile components, meaning it burns without emitting as much smoke – around 80% less than traditional coal. While some people believe that smokeless coal is full of added chemicals or lab-grown nasties to remove the smoke, this couldn’t be further from the truth. It’s still a natural product, simply manufactured from a different type of base carbon than regular house coal.

The power and possibility lies in the anthracite base. It actually burns hotter and longer than regular coal giving you 5-6 hours of burn time and an extremely high heat output. Smokeless coal really is the perfect fuel. Whether you live in a smoke control area or not, there’s no reason not to give it a try in your fire.

Is smokeless coal better for the environment?

In a word, yes. Smokeless coal is made with less volatile components, so there’s significantly less toxic smoke compared to regular house coal, meaning it’s cleaner to burn. Plus, the higher heat output and longer burn time mean more efficiency compared to many other fuels. Ultra-efficient fuels are a great way to lower your carbon footprint, as you’ll use far less fuel to get the same amount of warmth in your home.

Can you burn smokeless coal in a multi-fuel stove?

While smokeless coal is ideal for open fires and fireplaces, it’s also perfect for multi-fuel stoves. The high heat output and extended burn time of smokeless coal make it a fantastic fuel choice. Plus, the absence of volatile chemicals makes it cleaner to burn and kinder to your stove. While traditional house coal can leave lots of soot residue, tar which blackens stove glass and can even damage your stove or flue, smokeless coal produces far less of these by-products.

Can you burn smokeless coal on an open fire?

More good news – of course you can. Smokeless coal, like traditional coal, is designed to be used on open fires and will burn very efficiently in a grate or fireplace. For those in smoke control areas, smokeless fuels like smokeless coal may in fact be your only option. But for those outside these areas, smokeless coal is also a great option due to its efficiency and high heat output.

The other obvious benefit of using smokeless coal on an open fire is that it will simply emit less smoke. With an open fire, most of the smoke will dissipate up through the chimney, however there is still some smoke that may enter the room. Using smokeless coal will further reduce the amount of smoke emitted in this process, as well as the harmful particulates that may enter your room from the fire.

So, now that you know a little bit more about our cleaner and clearer friend smokeless coal, why not give it a try on your fire? With all the benefits we’ve discussed, from its long burning time to the high heat output it produces, it could solve many of your fuel needs. If you’re thinking of trying smokeless coal, Big K offers both 10kg and 20kg bags, tested to a 5-6 hour burn time in a standard open fire test. Big K’s Smokeless Coal is also available in our pallet deals for both 10kg and 20kg bags, meaning you could save up to 35% on your order of smokeless coal by buying in bulk. Plus, grab free next day delivery on orders over £30 and free 48 hour delivery on every pallet ordered.