Seafood Barbecue Recipes for the Summer 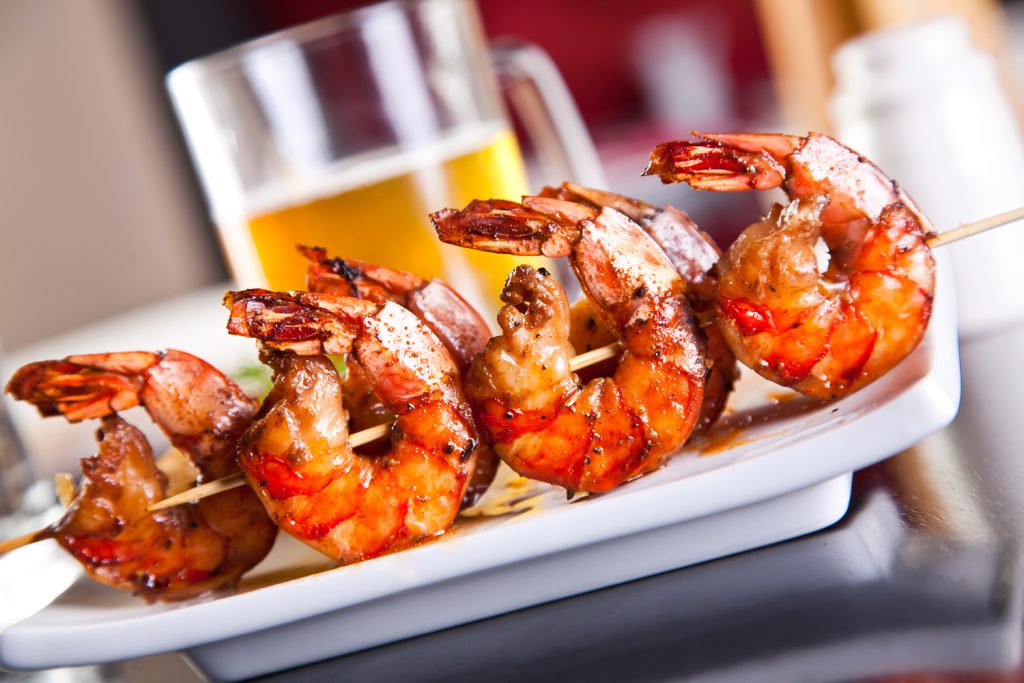 The BBQ world is dynamic and ever evolving with new equipment, new fuels and new diet and health opinions. There’s always something fresh to discover and perhaps try out for yourself. It is no surprise that barbecue recipes offer a constant stream of innovation, excitement and opinion. It is a real of infinite taste possibilities – literally. Join us as we unravel one delicious thread from this constantly changing tapestry.

Seafood is quickly becoming a new barbecue favourite as fish and shellfish recipes are considered a healthier alternative to red meat. Seafood is also a fantastic option for those who don’t eat red meat for dietary reasons, meaning that nobody misses out on the pleasure of tucking into some mouth-watering barbecue food. We’ve found some delicious seafood barbecue recipes that are bursting with fun and flavour. Any of these recipes can be cooked on a variety of barbecues.

Quick tip – wood based fuels will give your fish a slightly smokier taste if you’re not cooking with foil.

As a seafood barbecue recipe, crispy salmon with cucumber yoghurt is a light and not too fishy option. It can be the main attraction at your BBQ or sit alongside more classic carnivorous options.

Start off with a large side of salad, skin on, scaled and boned by you or your fishmonger. Then, brush the bars of the barbecue to prevent the fish from sticking. Next up lay your fish on a chopping board and using a sharp knife slash the skin evenly about 1cm in depth. Sprinkle the zest of one lemon and some finely chopped basil or fennel heads into the grooves and push everything firmly into the slices. Rub the fish down with some olive oil and season to your taste. Cook on the skin side first until golden and then flip over gently to cook the other side. You can then carefully remove the skin from the fish and cook it alongside to crisp up. Finally, remove your fish once it’s cooked and allow to cook slightly before plating up.

For the cucumber yoghurt, cut a cucumber in half, remove the seeds and chop it up into small slices. Add the slices to some plain yoghurt with the juice of your zested lemon, then add half a chopped chilli and some finely chopped mint or oregano. Lastly, drizzle the sauce over the top of your salmon with some olive oil. It can be served as a refreshing accompaniment to your barbecued salmon. Now that is one fine seafood barbecue recipe – if we say so ourselves.

Tuna is a really versatile fish, and even though it has a slightly stronger taste, it can often replicate the meaty feeling of steak if it’s cooked a certain way. It’s time to add another delicious dish to this collection of seafood barbecue recipes.

First, make a teriyaki marinade in a shallow dish using two tablespoons of soy sauce, a tablespoon of rice wine, one large minced clove of garlic and one chunk of fresh minced root ginger. Alternatively, you could also buy a pre-made teriyaki marinade. Place four tuna steaks in the marinade, cover and leave the marinate in the fridge for at least half an hour. Preheat your barbecue on a medium to high heat, remove your tuna from the marinade and gently brush the side of each steak with olive oil. Cook for three to six minutes or until it’s ready. Serve with a crunchy salad or chunky chips.

These simple and tasty skewered prawns are a juicy addition to your seafood barbecue recipe arsenal. Start off by placing three finely chopped cloves of garlic, one finely chopped and de-seeded chilli (or some chilli flakes if you prefer), two tablespoons of olive oil, two teaspoons of lime juice and some salt and pepper into a bowl and mix up until well combined. Pop your prawns into the mixture to coat them evenly, cover, and then put them in the fridge for at least 15 minutes to marinate.

Preheat your barbecue to a high heat and poke your prawns onto some metal or bamboo skewers (soak these in water first and beware of burning bamboo skewers). Cook the prawns for a couple of minutes either side, until cooked through and golden in colour. Serve with some fresh lime wedges and homemade mayonnaise for a refreshing summery barbecue snack.

Swordfish is a fantastic fish for the barbecue. Just like tuna it holds well and has a steak-like texture. Make a marinade by combining three tablespoons of honey, three tablespoons of soy sauce, one tablespoon of oil, two small minced cloves of garlic, two small teaspoons of grated ginger, the zest of one lime and the juice of one lime, plus some pepper and salt. Place this in a shallow dish over the top of your swordfish steaks, cover and refrigerate for at least 30 minutes.

Preheat your barbecue to a medium-high heat and place your fish on the grill, brushing the rest of the marinade over as you turn the steaks. Cook for a few minutes on each side and re-coat in the marinade, then allow to cook again for five minutes. It’s tasty with some sweet chilli rice, potato salad or a crunchy, sweet side salad.

So there you have it. Just a few seafood barbecue recipes to turn any BBQ into a feast of flavour. Of course, we’re on hand to provide everything from Premium Grade Lumpwood Charcoal and our high quality Thüros stainless steel grills to the littlest item such as bamboo skewers. Whatever you choose, with Big K it’s easy to turn your BBQ into a flavour filled experience. Check out our product range and see for yourself.