Jackie Weight gives her take on BBQ culture and more

We love people. Each individual is one of a kind that cannot be replicated…at least not yet anyway. Individualism isn’t just about DNA and genetic makeup. We all have a totality of experience that defines us. In today’s narcissistic ‘look at me’ culture, we’re all about putting down the selfie stick and engaging with people. What can we learn from each other? How can we help each other grow?

With all this in mind, we are beyond delighted to be chewing the metaphorical fat with the one and only Jackie Weight. If you aren’t necessarily hip to the flame game, we can tell you that Jackie is definitely a Heavyweight (pun soooo intended) in the BBQ subculture. A BBQ World Champion, Jackie has over 30 years experience of BBQ, producing everything from simple cooks, to low ‘n’ slow American style smoky BBQ, gourmet cooking and baking on the BBQ.  She also has commercial experience working as a culinary consultant for restaurants and caterers, as well as being the founder of BBQ Workshop – a BBQ cooking school.

Ok enough with the preamble; let’s dive into the detail!

Big K: How would you say that the BBQ subculture has evolved over the last 15 years?

Jackie: To give a little clarity, I see the BBQ subculture as being all about cooking food (including larger cuts of meat) over indirect heat. It is certainly a growing subculture and I’d like to think I am helping to further build it by teaching this method in my BBQ School. Once converted, I have found that people really love this way of cooking as it allows them more time to socialise when cooking for friends, plus it means that they don’t have to stand over a grill fighting back flames.

Big K: What’s the hardest thing about teaching people how to BBQ?

Jackie: To be honest, I find teaching people how to BBQ quite simple. Almost everyone who comes on one of our classes really wants to learn, this in turn means that they are open to new ideas and ways to improve how they cook over a barbecue. Even when I teach chefs, they usually want to understand new methods and ways of cooking, which means they are already more open to new ideas.

Big K: What is your cooking/BBQ philosophy?

Jackie: I think that BBQ is about cooking outdoors and it shouldn’t matter whether you are using charcoal, wood or gas. I believe that BBQ and cooking in general should be appetising, tasty and relatively simple. So I like to prepare and cook foods that are simple too. This basically means that anyone can cook them. However simplicity doesn’t mean a lack of flavour. The food must also be tasty and impactful enough that when people re-create them, their friends and family are really impressed. I want people to learn during our BBQ Workshops and then make the dishes at home, sharing those foods with their friends.

Big K: How do you feel about the position of women within the contemporary UK BBQ scene?

Jackie: There are quite a few women on the UK BBQ Scene! Ok so we are outnumbered by men, but does that actually matter? BBQ is something that anyone can do; we have both men and women attending our BBQ Workshops.  Yes, the men do outnumber the women here too, but you’ll find that the bookings are predominately made by women for men (read into that what you will). 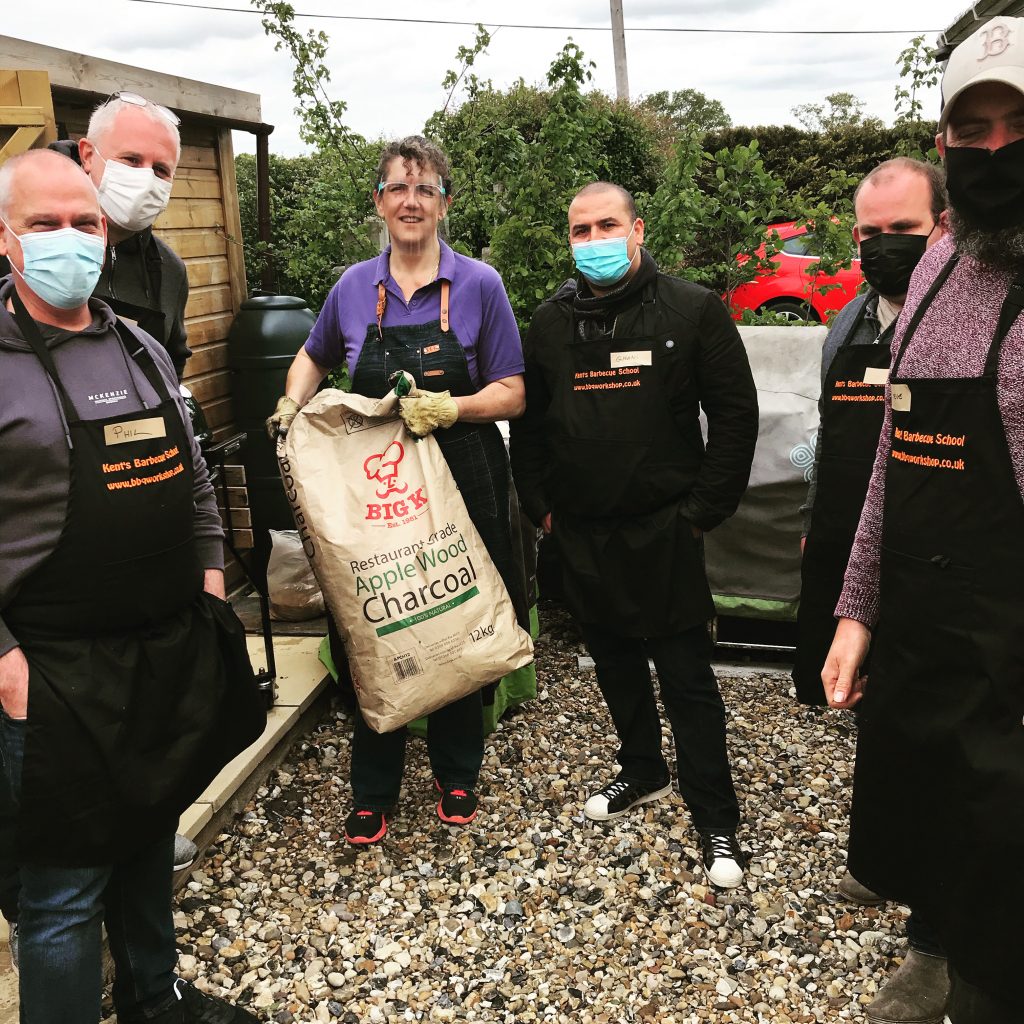 Big K: Why did you decide to set up your own BBQ school?

Jackie: I have been working with Restaurants and Caterers for around 16 years, consulting on restaurant setup, menu design, recipe development and chef training. Four years ago, my partner Dave, persuaded me to start teaching BBQ from my outdoor kitchen at home and things grew from there. We now have a lovely purpose-built facility and a great client base. I still do the restaurant work but now I combine it with our BBQ School. It’s wonderful to be able to combine a hobby with a business.

Big K: What new projects have you got coming up?

Jackie: Now that would be telling! My current plans are to continue to expand and improve the BBQ School and BBQ Rub Business, the rest is definitely a ‘watch this space’ thing!

Big K: What role does technology play in your BBQ life?

Jackie: We like to be more ‘old school’ at BBQ Workshop and I purposely keep things quite low tech. I believe that people should learn the basics first, from controlling fire, temperature, timings etc. Once they have that information secured in their minds, then they can play with the technology available. I do tell people about some of the technology, should they wish to think about it in the future. On a personal point of view, the most technology I use is a Wi-Fi enabled Traeger Pellet BBQ and I only tend to use some of the features on that if I’m doing an overnight cook (so that I can control things without getting out of bed). 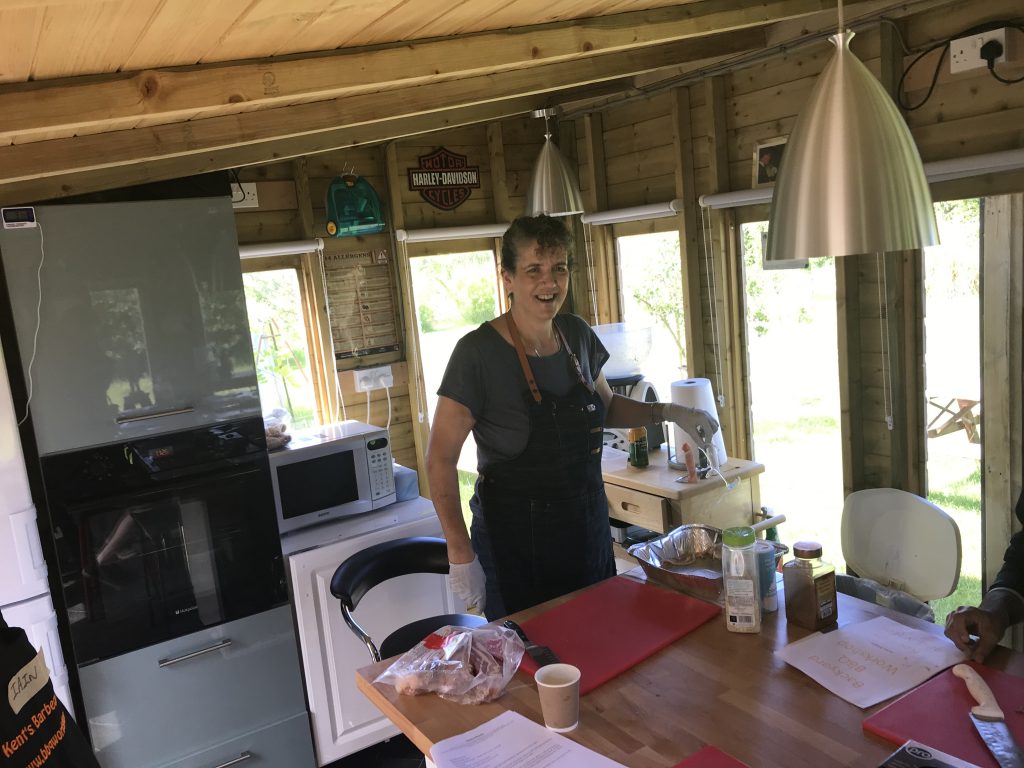 Big K: Do you think people are educated about food – origins, production etc.?

Jackie: Some people understand a lot about the food they eat, while others are put off by knowing, so I think it’s a personal choice. I’d like to think I know a fair bit about meat production; I was a farmer for quite a few years, after retiring from a career in IT Management in London. We mainly had pedigree herds, but also took some of our cattle and pigs to the local abattoir to be killed and prepared. I wanted to understand the process of animal production from birth to death, so I went through the whole process, from taking the animal into the abattoir, to the kill, cleaning (I still remember the smell of this part, please don’t ask me to describe it) and eventually butchering. I have undertaken butchery classes, sausage and bacon making classes and also spent a year at an Agricultural College understanding animal management and farming.

Big K: How and where do you find inspiration for your cooks?

Jackie: A lot of my inspiration comes in the middle of the night; suddenly I wake up and think of a crazy idea that might just work in a recipe. I’ve taken to keeping a pen and paper by the bed so that I can write things down, otherwise by the morning it’s just a blur! Other times I’ll see something on TV or in the media and like the idea of the dish but decide that I would do it differently and then play around with the idea to create something that will work on a BBQ. I’ve had my share of gastronomic masterpieces as well as amazing failures.

Big K: How does your personality translate into your cooking style?

Jackie: I was born to Maltese parents and have that typical Mediterranean philosophy – meaning there should always be lots of food served to ensure that nobody ever leaves hungry and even better, that they leave with leftovers. I apply this idea to my BBQ Workshops, where food is always served in abundance. Style wise, I’m pretty laid back and like to show that in my cooking. Everything we do on the BBQ Workshops is designed to be cooked throughout the day and finished and ready to eat at the same time. People never cease to be amazed at how relaxed I am about the whole cooking process (think graceful swan on the surface and legs paddling madly below the water) and that they are all taking food off the barbecues and loading the table ready to eat, on time.

Well that was a glorious bit of chin-wagging and we learned a lot of nuggets to put into practice on the grill. Jackie you are a star. Thank you for taking the time to share your thoughts with us. Who is up next? Stay tuned to find out.