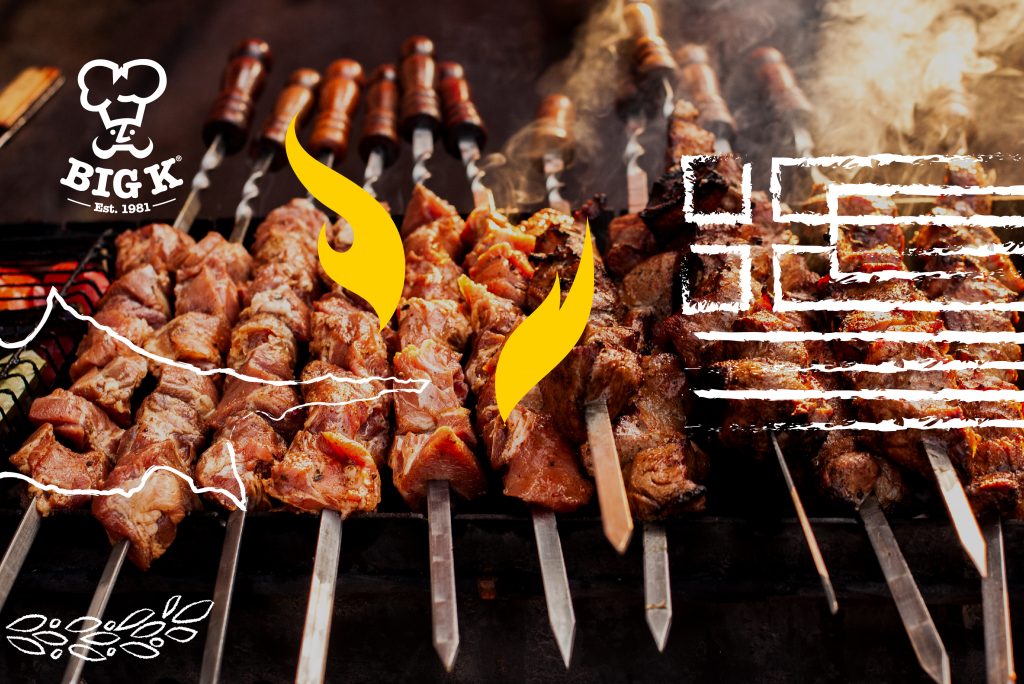 Let’s travel back in Greek BBQ history. Santorini, Greece, late seventies to early eighties. A young and ambitious archaeologist, Christos Georgiou Doumas, is heading a series of excavations in Akrotiri. An energy and excitement fills the air. Each day is alive with anticipation as skilled hands carefully remove scorched soil, unearthing echoes of past civilisations.

One find stands out – a ceramic tray. It is simple, unassuming. The sides are smooth yet slightly irregular. Small indentions ripple on the surface, traces of an artisan’s touch. And evenly spaced grooves run parallel along the top of each side. This is no ordinary tray. It is a miniature portable barbecue complete with the capability to accommodate spits. A feat of ancient engineering used to cook Greek souvlaki – skewered meat. The mind-boggling part is that the artefact dates back to the Mycenaean period of the Greek Bronze age. We’re talking 1600 to 1100 BC here people. So souvlaki is truly ancient, a Greek BBQ dish that lies at the very heart of Greek national identity and the wider Greek BBQ culture.  Let’s unpack this meaty marvel together and learn how to grill it too! 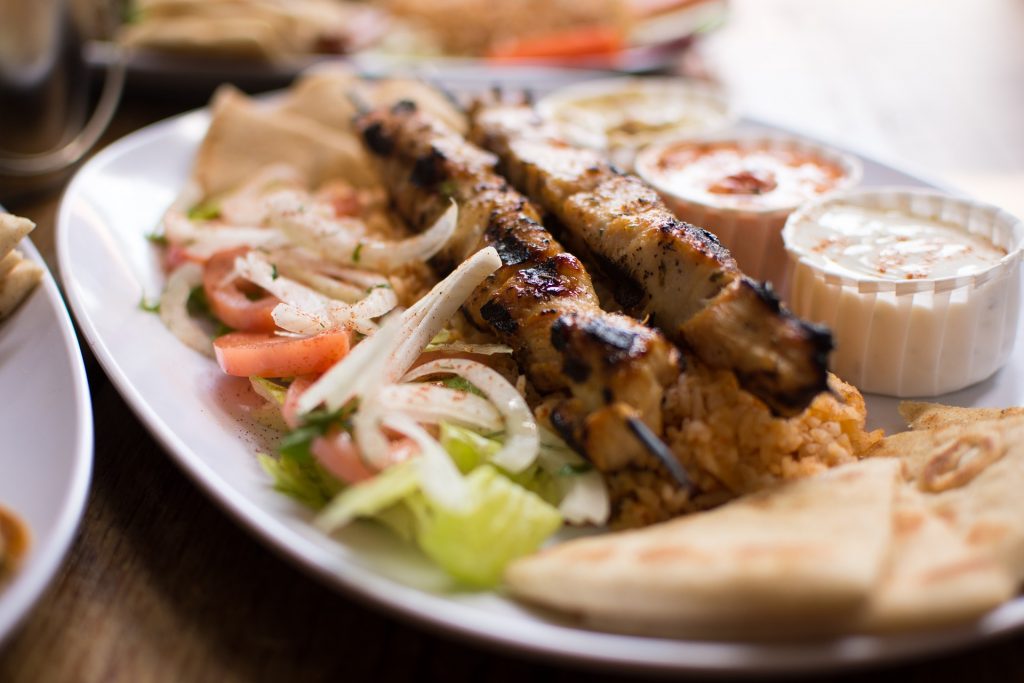 Souvlaki (pronounced soo-VLAH-kee for the non Greek speakers) plural souvlakia, is an extremely popular Greek BBQ ‘fast food’ consisting of small pieces of meat grilled on skewers. The name is a reflection of how it is cooked, as the word souvlaki comes from the Greek word souvla meaning spit.

Looking for food for Greek BBQ? Get to know souvlaki’s history.

Guys you know how we operate. We believe that to fully appreciate any type of BBQ cuisine, you should really know a little about where it comes from, its characteristics and how it has evolved over time. This understanding and appreciation will lead to a better and more engaging grilling experience – in our own humble opinion of course. The souvlaki story literally spans thousands of years, so we will cherry pick a few highlights for you.

Starting from the Greek Bronze Age and moving through Ancient and Medieval Greece, as well as Early Modern and Modern Greece, souvlaki has always been there. It has touched the taste buds of some of the most famous Greek minds, appearing in many works of literature. Homer mentions the popularity of souvlaki in his epic Iliad poem and moving forward into the Ancient Greek period, Aristotle and the playwright Aristophanes speak of skewers of souvlakia in their works. Souvlaki even pops up in Medieval Greece during the Byzantine era, with references to street vendors selling souvlakia with pita bread in Constantinople. Entering into the modern day, souvlaki (as we know it) hit the Greek BBQ mainstream after World War II. Now there is some debate on this we’re sure, however it is believed that the first Greek BBQ souvlaki shops and restaurants appeared in Livadia in 1951 or so, selling souvlakia grilled on sticks or vertical or horizontal gyros (mechanical rotating sticks).  Since then it has grown throughout Greece, Cyprus and the globe – in the latter example mostly thanks to Greek and Cypriot immigrants moving to new pastures. 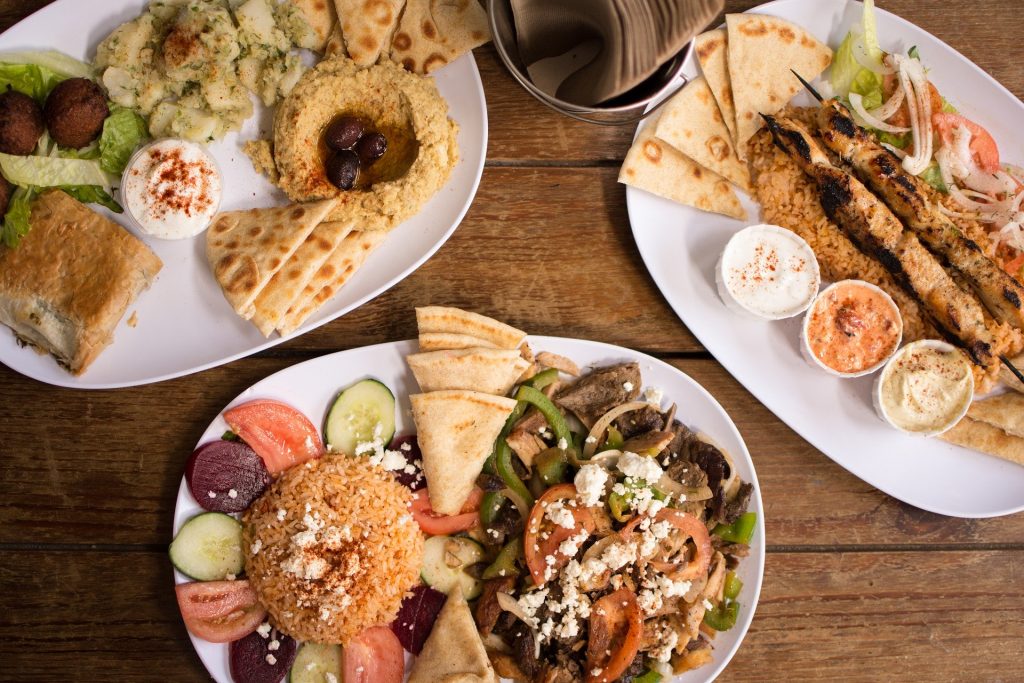 We apologise if your head is spinning. You have moved at the speed of light through thousands of years of history in just a few sentences. So let’s slow things down and clear up some tasty terminology. On your Greek BBQ travels you may have come across multiple labels for this skewered sensation – souvlaki, gyros, soulvla or kalmaki for example. Over time these names have melted into one another, all falling under the general term of souvlaki, but there are delicious differences that you should know. Then you can choose the right dish to grill for yourself.

The classic Greek BBQ staple of skewered meats (mostly pork as well as lamb or chicken) cooked over a grill. Souvlaki can be eaten by itself or plated up with fried potatoes.

A bready cousin of souvlaki with not much to it. Simply take your souvlaki meat, garnish with sliced tomatoes and onions, then add a dollop of tzatziki. Finally everything is wrapped up in a lightly grilled pita.

Technically this isn’t souvlaki proper. The souvlaki is replaced by kebab cooked on a rotating gyro and wrapped in pita.  However as it looks very similar it is often referred to as souvlaki.

So what is souvla? Well, souvla is the Cypriot incarnation of Greek souvlaki. The difference? The cuts of meat on the skewers are much larger, slow cooked for a lot longer and they are initially positioned at a further distance away from the charcoal. The cooking time of souvla is between 1.5 to 3 hours depending on the type of meat, size and charcoal heat output. The result is succulent moist souvla with a golden brown coating.

This is defo one for the souvlaki purists. The Greek word kalmaki can be translated as little reed. In Athens people refer to souvlaki in this way, as for some, truly authentic souvlaki is skewered on wooden skewers AKA ‘little reeds’. The meat is cubed into 1-inch chunks and marinated over night in a mix of lemon juice, olive oil and Greek herbs and spices such as oregano. Finally it is skewered and broiled over charcoal. 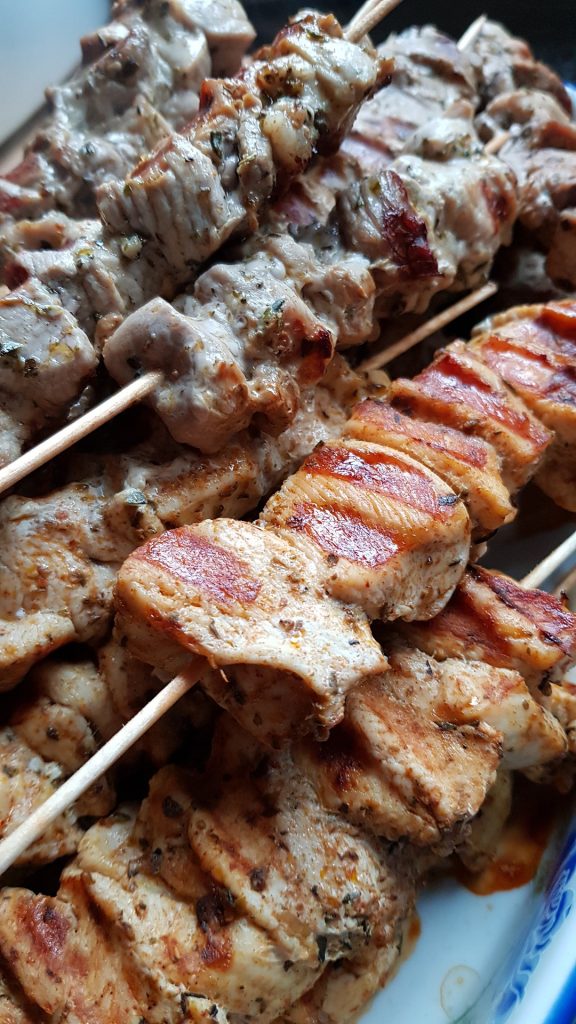 You must be feeling pretty chuffed now that you are savvy in souvlaki semantics. And you have some Greek BBQ knowledge and history to boot. Let’s bring everything together in a pork souvlaki recipe so scrumptious in its simplicity.

Whenever we include recipes we’re always aware of the infinite variations in prep, quantity of ingredients, grilling technique and so on. This disclaimer is to say that we know souvlaki is sacred to so many. And we’re sure that the recipe passed down from your giagiá (that’s granny to all the uninitiated Greek speakers out there) is in fact the best way to make souvlakia. We’re just trying to give a more general, accessible and ultimately simple souvlaki recipe for everyone.

How to make pork souvlaki

The key to tantalisingly tasty souvlaki lies in the marinade. The great thing is that it is so easy to prepare. First add 2 cups of extra virgin olive oil into a bowl. Then cut and squeeze four lemons, adding the juice and pulp into the bowl as well. Next mix 4 heaped tablespoons of dried oregano into your marinade and about 1-tablespoon of salt and pepper. Stir or whisk the mixture for about a minute. Your marinade is ready.

Now it’s time to prepare those delicious bite-sized chunks of pork. Take your meat and cut it into one-inch cubes. The trick here is to first score the pork before your main cutting, then cut with the grain of the meat. This will make the actual cube cutting easier. Once you have your pork cubes ready, break out your lemony and herb infused marinade. Coat your cubes in the marinade and leave them in the fridge for 30 minutes up to 3 hours depending on your preference.

Let’s get to the point…groan. Remove your pork from the fridge, take your 1-inch cubes and add about 4-5 to pieces to each skewer. Quick tip here: if you are using wooden skewers, soak them in water for one to two hours first. This will make them more robust when the grilling starts.

You want to grill your souvlaki over a consistent, reliable and direct heat. This is achieved by spreading your charcoal out your charcoal in a smooth and level pile. The ‘flatness’ of your pile will ensure even and direct heat distribution for your skewers. If you need some additional pointers on how to get your charcoal going, take a look at our helpful blog. If you’re looking to grill up truly authentic souvlakia you need some seriously high performing charcoal. We recommend either Dura or Flama from our professional restaurant grade charcoal range. With monstrous 3 hour plus cook times, and consistent, reliable heat outputs, you can keep the souvlakia coming all BBQ daylong. Right now we’re also offering some super savings with our professional pallet deals. Get the heat and make a saving today.

The secret for succulent souvlaki lies in the timing. Basically you don’t want to light your charcoal and add your skewers straight away.  Rather patience is a Greek BBQ virtue. Look at the total cook time of your charcoal and wait until you are about 2/3 of the way through it, before adding your souvlakia. This is arguably the temporal sweet spot for the maximum heat consistency, so you will get that perfect cook throughout your pork. Handy hint here: keep some water in a spray dispenser nearby. As we are dealing with an olive oil marinade, it could drip onto your charcoals and perhaps cause a small flare up. These are easily managed with a quick spritz of H2O.

Now that your pork souvlakia is sizzling away, you should cook them for about 10-12 minutes. Just remember one thing – rotation, rotation, and rotation. Frequently rotating your souvlakia will deliver a thorough and even cook throughout, which equals moist magnificence in the eating equation. Final quick tip here, have a 1-part olive oil to ½ part lemon juice marinade on standby. Take a brush and coat your souvlakia 5 minutes before they are done. This will re-invigorate the lemony foundation of flavour before serving.

Just a final word on souvlakia here, pork is the more modern manifestation of this Greek BBQ staple. However if you want to go old school for a taste of tradition then lamb is the right choice. The good news is that you can follow the exact same recipe above and simply swap out the pork for lamb.

Another day, another BBQ dollar in your knowledge bank as we say at Big K.  If you’re going to cook up some souvlakia, please take a pic of your creation, post and tag us on social media. We’d love to share them with our foodie family.