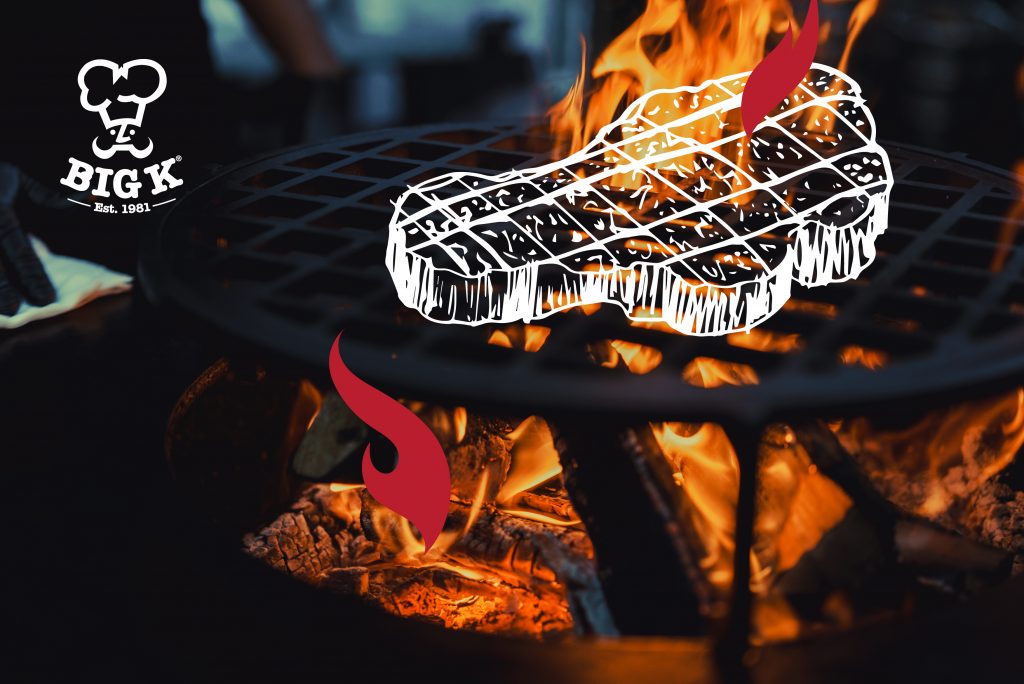 Clearly the Big K Fam has succulent and moist BBQ steaks on the mind. How can we tell?  A little BBQ birdie told us about that porterhouse poster on your bedroom wall. Ok that’s perhaps a little far fetched, but you’re here for part 2 of our juicy journey into BBQ steaks, so we know you’re big into beef. Just a quick recap – in part 1 we went back to the BBQ steaks source, getting up close and personal with cows and cuts. If you missed it, catch up here. Ok let’s do this.

How do you cook steak on your BBQ?

In part 2 of this series we’re going deep into meat. Learn how to choose quality beef, discover more about the most popular BBQ steaks out there and finally, follow our step-by-step guide on how to create heavenly BBQ steaks. Want BBQ steaks recipes and BBQ steak ideas? Let’s get it!!

Buying BBQ steaks at the supermarket? Here are some handy hints on quality

The good thing about going to the butchers is that you have your very own BBQ steaks expert on hand. But for some, it’s easier to buy beef as part of the weekly shop in the supermarket.  However it can be a little tricky. Did you know that a person’s average dwell time when choosing a steak is 3 to 4.5 minutes? Yes studies have been done on such things – thanks consumerism! Cut, weight, fat content, breed, grass fed or non-grass fed; the points of differentiation go on and on. The reality is that many of these factors influence taste and texture (important but not necessarily deal breakers), so we ‘re only focusing on some quick checks to assure quality here.

The best steak for BBQ? Learn more about popular cuts. 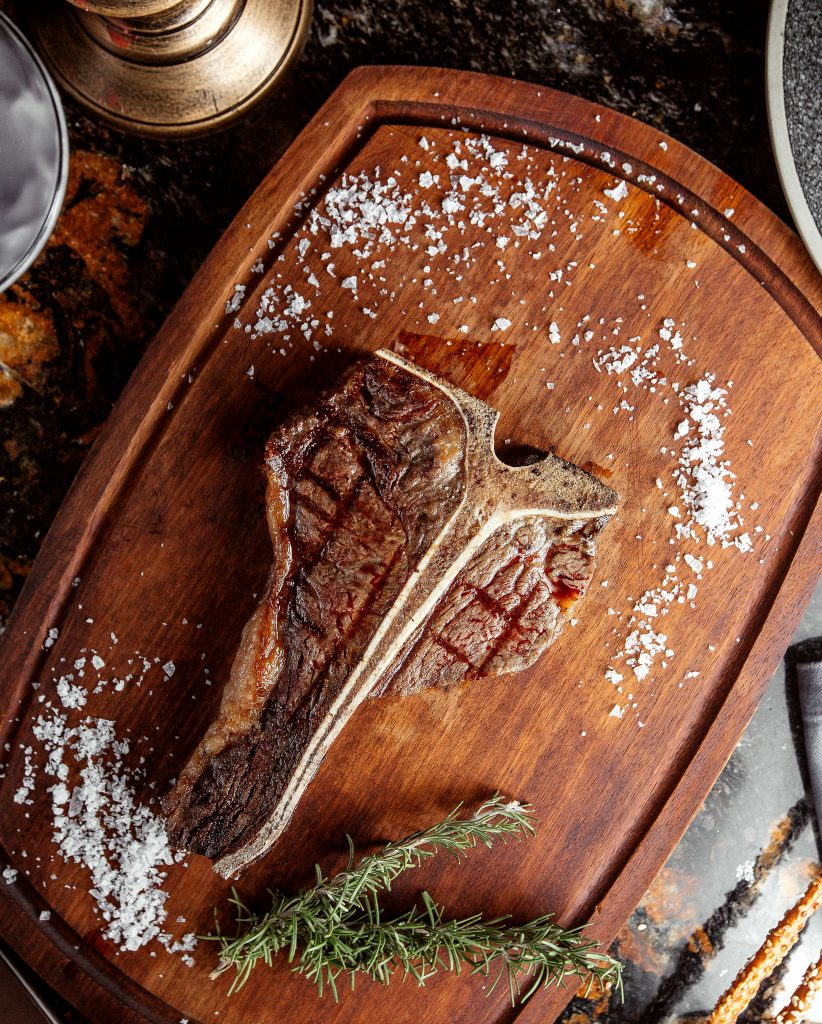 Picture a gargantuan slab of meat consisting of two cuts of steak. These cuts are divided by a ‘T’ shaped bone, and the split delivers a BBQ steak double whammy – the tremendous taste of the sirloin and the top tenderness of a fillet.

The cow’s muscle activity determines tenderness. So less work equals more tenderness. That’s why the ribs produce big tender steaks. This is the marbling sweet spot so expect juiciness and flavour with every mouthful. Ribeye can come with bone (labelled as ‘bone in’ rib eye) or without.

Filet mignon, chateaubriand – these opulent steaks and steak dishes are cut  from the tenderloin or fillet as it known in the UK. We went into depth on the tenderloin in part 1 so check that out if you missed it. In a nutshell fillet steak is cut directly from the tenderloin muscle, so it is a premium cut of the highest tenderness. This means it is slightly smaller and more expensive than other BBQ steaks. 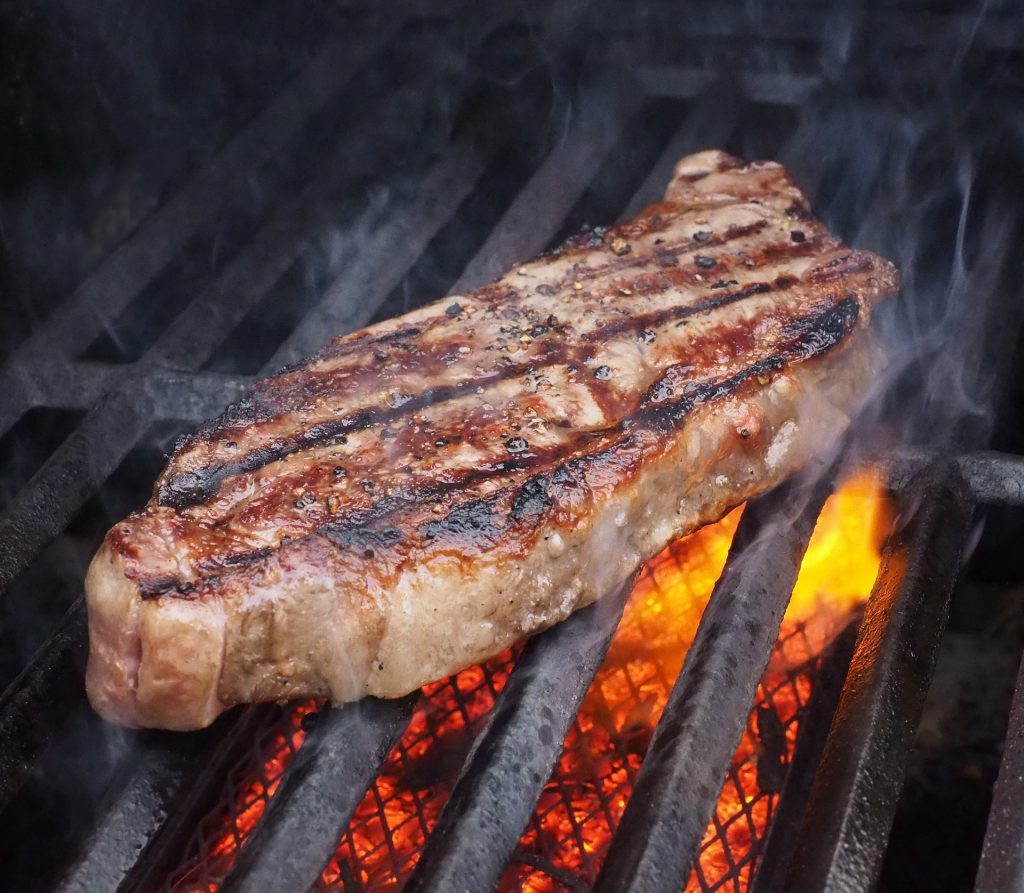 The sirloin steak lies far away from the cows’ extremities at the top of the back in the loin. It isn’t as tender as the tenderloin but it has more flavour due to the increased presence of fat in that area. The sirloin steak has many aliases including the Kansas City strip, the porterhouse. And New York strip,

How to make the best steak for BBQ? Here are 8 steps to guide you.

Bring on the BBQ steak recipes and BBQ Steak ideas!

Now that you are a BBQ steak Rain Man this part should be easy. Quick recap, a fillet, Scotch fillet, porterhouse, rump, round, T-Bone and blade are all epic BBQ steaks.

Obviously your chosen BBQ steaks will be chilling out in the fridge and rightly so. However take them out at least 30 minutes to several hours before cooking. This will help your BBQ steaks get closer to room temperature ensuring a more even cook throughout the meat.

It’s all about meat and flame and not much else. Simply rub both sides of all your BBQ steaks with olive oil. Then lightly season both sides of each steak with salt and pepper just before cooking. If you season the steaks too early, the salt will draw out the juice and meaty flavours leading to a tougher chew.

Many ignore the importance of this key step. You see your charcoal is the cooking catalyst. It will determine everything form the thoroughness of your cook to your BBQ steak’s taste and texture. If you’re buying quality beef, you need quality charcoal to match. We believe that a bag of our high quality professional restaurant grade charcoal will work wonders for your BBQ steaks. Whether you choose Flama, Dura, Au Natural, Chilla-Grilla or any other charcoal from the range, these high performing charcoals will get the job done. We’re talking consistent heat, high performance and longer cooking times, so you can even grill steaks for hours if you’re into that kind of thing. Go pro right now and save with our pro pallet deals.

If you have thinner BBQ steaks (less than ¾ inch as previously discussed) you need to set up your charcoal for cooking with direct heat. It’s easy, direct heat output requires a flat and even spread of charcoal keeping the pieces at one level. That’s it.

If you have thicker juicier BBQ steaks (thicker than one inch) you need to set up your charcoal for the 2-phase technique. This is done by creating two heat zones – one for direct heat and one for indirect heat. Simply push your hot charcoals to one side of your barbecue and then flatten pile. This pile is offers direct heat for searing (phase 1). The empty space on the other side of your barbecue is your indirect heat zone for the rest of the cooking (phase 2). 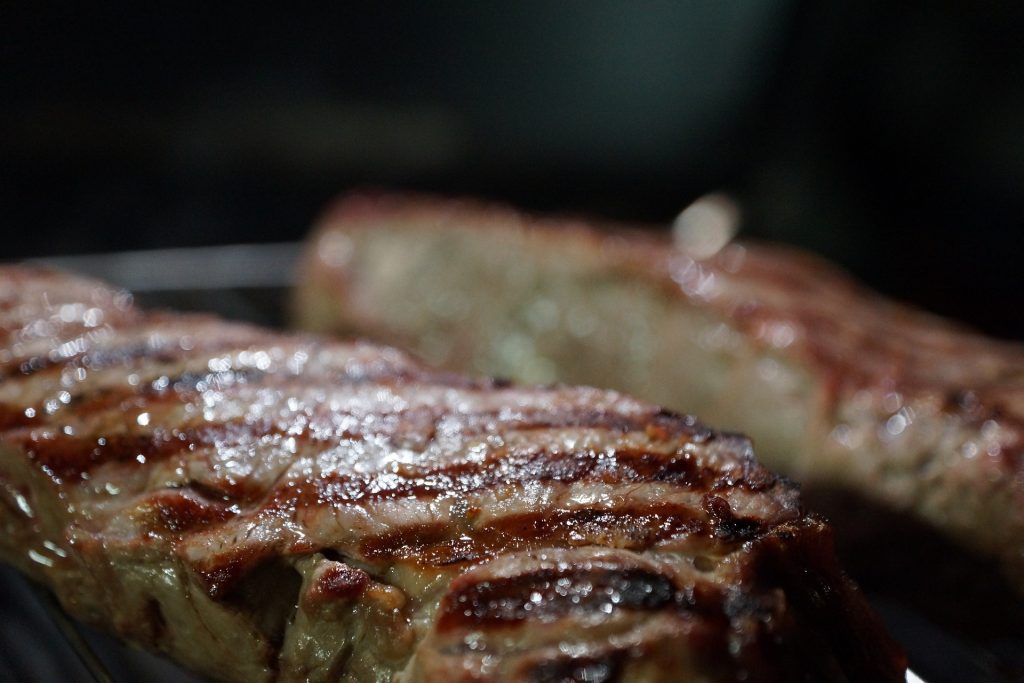 What makes BBQ steaks so special in the grill game is that you can customise how you cook them – bleu, rare, medium rare, medium, medium well. This is down to the fact that bacteria can’t penetrate beyond the meat’s surface, so essentially once you have cooked the outside of your steak, it is perfectly safe to eat.

Steaks under ¾ inch thick. One phase technique over direct heat

Once you have finished cooking, move your steak to a plate, cover it with foil and leave it for minutes to settle. This is because when the steak is heated the juices are forced into the centre. A cooling rest allows the meat to relax, evenly redistributing the juices.

The right marinade for BBQ steak?

Here is a lightening fast guide. Basically thicker and less tender cuts of steak should be marinated anywhere between 2 to 15 hours depending on their thickness and your preference. The more tender cuts of beef, like tenderloin, only need to be marinated for 15 minutes to 1 hour. Want more info? Check out our marinade blog  for full details and marinade recipes.

Finally if you want to go dirty and really get your caveman on, why not cook a dirty steak? It’s so simple – simply remove your grill and cook the steak directly in or on the hot charcoal. We know what you’re thinking and the answer is no. Dirty cooking will not burn your steak. It’s just a matter of physics. When you put meat right against the charcoal it becomes mostly oxygen starved, meaning the charcoal cannot burn with a flame, so your thick BBQ steaks will cook from the released heat only. Word of caution here, avoid thin, soft or tender cuts. Stick with thick and juicy steaks.

We hope you’ve been mooooo-ved (come on we had to) by our 2 part BBQ steaks series. Take your newfound appreciation and express yourself on the grill.

Catch you around the BBQ bend.