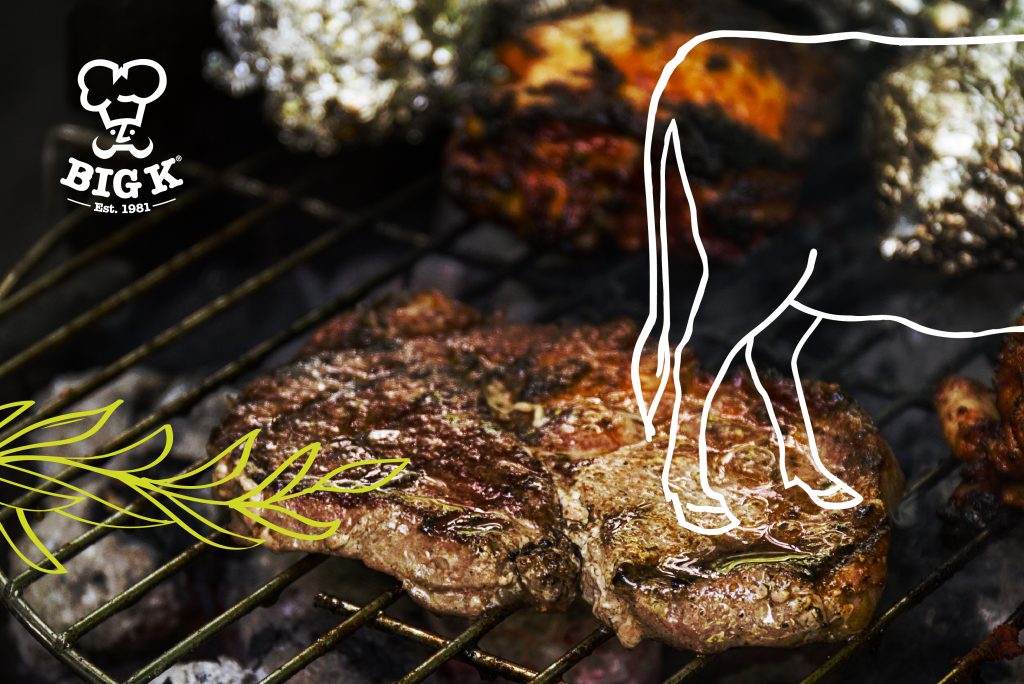 We live in a world of instant gratification. Next day delivery, continuous digital content, 24-hour retail – people want what they want and they want it now. However, the ‘how’ and the ‘why’ are often neglected.

Take BBQ steaks for example. That stunningly sumptuous and simply salivating sirloin on your plate is the zenith of bovine taste and aesthetics. Dark grill marks dance in uniform crisscrossed precision. A perfectly seared golden surface conceals the heady mix of juices within. You take a bite and moist melt-in-the-mouth magnificent meat caresses the taste buds…sorry where were we?  Oh yes, all steak related hyperbole aside, sometimes we’re so focused on the instant carnivorous fix that the story, artistry and culinary science behind BBQ steaks isn’t even considered.

What’s the best steak for a BBQ?

Do you know what sirloin actually is?  Where does it come from? What’s the difference in taste between BBQ steaks from chuck and plate or flank and round? How do you grill BBQ steaks differently according to the particular cut? Don’t get it twisted. It’s not like you have to be an expert in all things Bos tauraus (another name for the cow collective – vocabulary rules!) to enjoy eating steak, especially if you’re not cooking it. But if you’re grilling BBQ steaks you should really know these things. The best BBQ steak recipes and BBQ steak ideas come from a place of knowledge. So let Big K be your guide as we journey into part 1 of our 2 part blog series on BBQ steaks.

How to cook steak on your BBQ? We must go back to the source

We know it must feel that we sometimes beat your brain with an obvious stick, however you’d be surprised at just how often the basics are overlooked. You see to grill the perfect steak you should really know as much as possible about the source – the biology and anatomy of the animal itself, where the meat is located on the body and the properties of the flesh.

Enter the domesticated ungulates from the subfamily Bovinae – A.K.A cows to the average person. Quick disclaimer – in the genus Bos species (we’re talking cattle here) cows are actually female and bulls are male. Both can be beef cattle, meaning both can be raised for their meat, however for the sake of not having to write ‘cows and or bulls’ or ‘steers and or heifers’ a million times, we will be using the term ‘cows’ to universally cover both male and female beef cattle.

How to choose succulent BBQ steaks? You need to know a cow’s anatomy.

Cows are fascinating creatures. Did you know that they can sleep standing up and posses four digestive compartments in one stomach? These are amazing facts but they won’t necessarily help you grill a succulent T-Bone. No no our charcoal obsessed friends, to become a maestro of BBQ steak ideas and BBQ steak recipes you need to know a little more about a cow’s anatomy. Before you rush to the nearest field and end up touching the wrong cow’s udders (now that’s an A&E story with ‘embarrassing’ written all over it) you might want to take a look at this basic diagram we’ve put together for you. To understand BBQ steaks get to know the cuts

Taking a look at our lovely little illustration you can see that there are 8 main cuts. Ok there are more cuts and sub divisions, as well as differences between the UK and US cut terminology. However we want you to get a general gist rather than drown in detail. Clarity is king. Different BBQ steaks come from these different cuts, meaning different flavours and textures per cut. To get all your BBQ steak ideas and BBQ steak recipes on point, you need to know these bad boys.

Here are our eight main cuts:

Where are the premium cuts for BBQ Steak? They are in the centre.

Now that you are a little more familiar with all the regions of the cow, what you need to know is that the premium and most succulent steaks are cut from the centre. This is the loin or rib section. Our picture isn’t exactly a pictorial riddle from the Da Vinci Code. It just shows basic biology. The best BBQ steaks come from the centre because these muscles do the least work. Think about it, the muscles in the cow’s leg and neck are extremely active, constantly expanding and contracting to shift anywhere between 750 – 1,100 kg of weight around the place. So these muscles are firmer meaning a tougher texture. Now, the loin and rib section are the farthest away from the cow’s horns and hooves (head and feet), so these muscles work the least, meaning they are softer and terrifically tender. 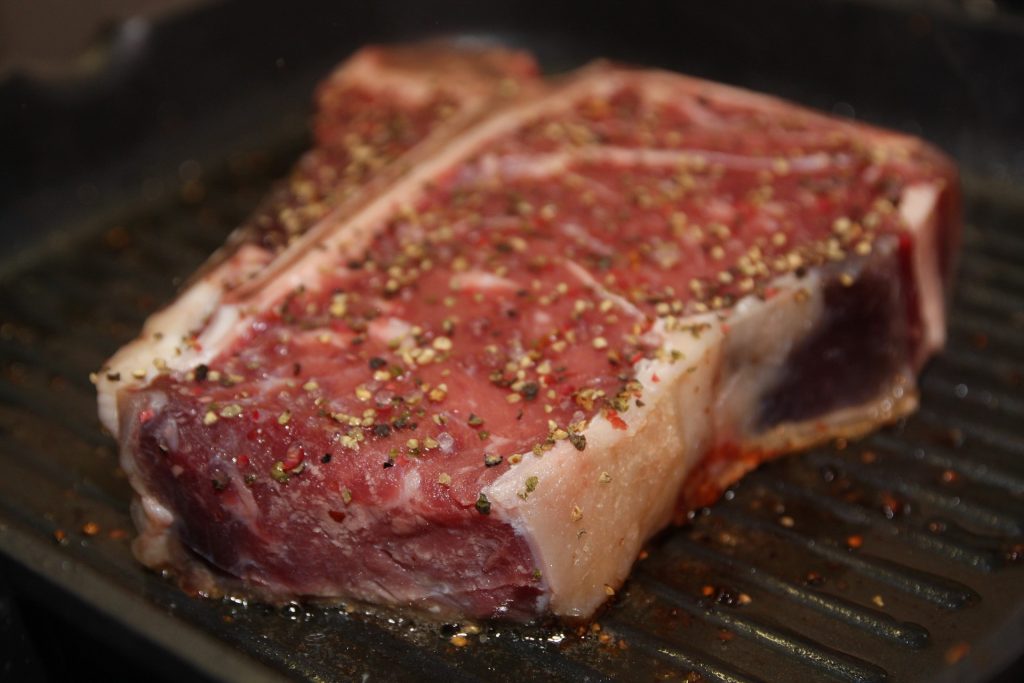 BBQ steaks and cuts. Which is from where?

The cow’s shoulder is the home of chuck meat. As the shoulder is active, the cut can be a little tough but it’s packed with flavour. The types of steaks you’ll get from chuck are mainly flat-iron steak and top blade steak

The rib cut consists of the cow’s ribs and backbone. There are in fact 13 pairs of ribs in total, however only ribs 6-12 are included in the main cut. Ribs pack a flavourful punch due to the extra fat marbling, plus they are super tender due to minimal muscle contraction in that area. You’ll find Delmonico steak, cowboy steak, and ribeye steak here.

An alternative source for short ribs is the plate or short plate. This cut is nearer to the abdomen so it has a higher fat content and is full of flavour. Meat from the short plate is used for skirt steak and Philadelphia steak.

Lean, but not necessarily mean on the wallet, rump cuts are generally a cheaper option. As the cut is situated at the cow’s rump and hind legs, the increased muscle activity leads to leaner meat and tougher textures. Popular steaks from here are the round steak, eye of round, tip steak, top round steak and cube steak.

You will find the flank below the loin. The cut may be slightly tough but it is lean, boneless and high on flavour. Healthy and economical, the flank is home to both the flank steak and London broil.

All about the juiciest BBQ steak? Let’s look at loin

Here we go carnivores and carnivettes, the section that stimulates some serious salivation. Enter the Land of Loin. There’s no doubt that the most popular, and the most expensive, BBQ steaks come from the loin section.  The loin runs horizontally, from slightly under the central point of the cow to the rump, and vertically from the mid section to the top of the cow directly behind the rib. As we’ve covered already, the cow doesn’t use these muscles that much, so the result is tender, softer meat with that melt-in-the-mouth factor we mentioned in our intro.

The loin is made up of three principal parts – the short loin, sirloin and tenderloin.

Your friendly neighbourhood butcher separates the loin and the short loin by making a straight cut through the 6th (and last) bone of the spine in the lower back.  The tenderloin can be completely cut out as a tenderloin steak, or it can be left in tact, with parts of it ending up in different steaks such as the T-bone and the porterhouse, depending on the cut.

Popular steaks from the short loin are filet mignon and tenderloin (more on these in a second), T-bone, porterhouse steaks, strip steak, New York strip, and KC strip. Things can get a little confusing in the BBQ Steaks sector as one cut of beef can have several different names depending on how it is cut from the main cut of beef. The short loin is a great example of this. Take a T-Bone and a porterhouse, they are both from the short loin and they are actually the same steak. The slight difference is that the porterhouse is a touch larger than the T-Bone. To dive even deeper, when one cuts around the actual ‘T’ bone, a filet and a strip steak are created. For now it’s fine to know about the loin and the short loin, over time you will pick up the intricacies, if you’re not already powerful BBQ steaks Jedi that is. 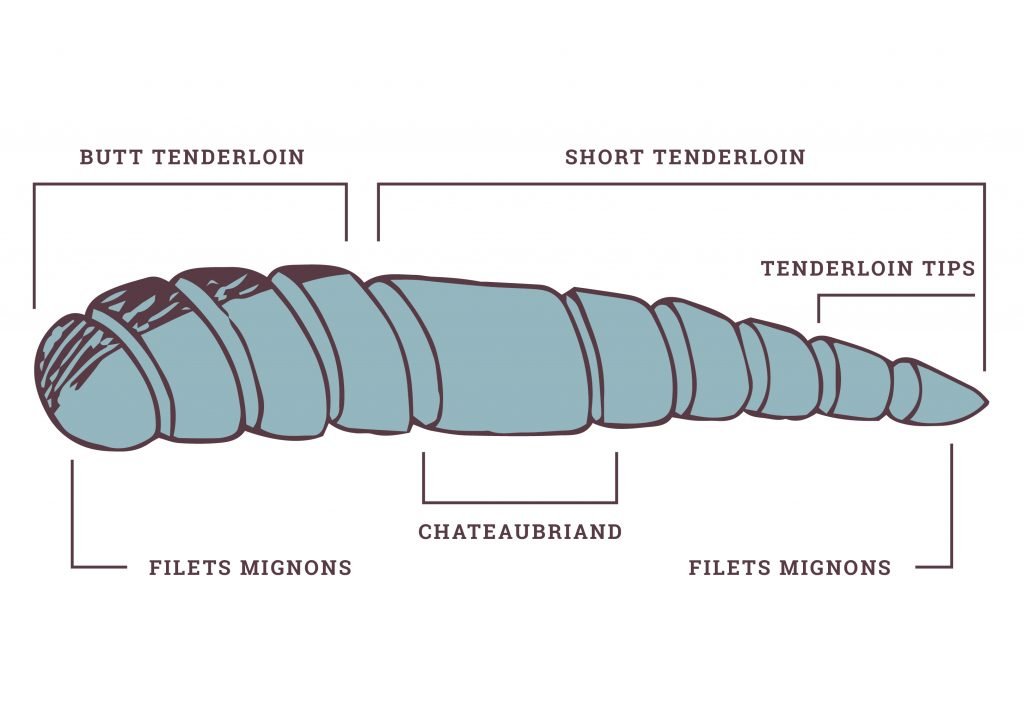 The tenderloin is the tenderest cut of beef you can get. So it is widely sought after and considerably more expensive than other cuts. As previously mentioned the tenderloin is a lean pencil-shaped muscle, known as the psoas major, sitting beneath the ribs, next to the backbone. Check out the illustration above if you’re having trouble visualising what we’re talking about. The VIPs of the BBQ steaks collective, chateaubriand and filet mignon, both come from the tenderloin.

Chateaubriand – Ok technically it is a dish not a cut, but we are using the term to refer to the steak itself. This premium cut comes from the centre section of the tenderloin. It is about 4 inches thick, weighing no more than 500 grams. Lean, lavish and extremely succulent, chateaubriand is a must for all the serious BBQ steak fanatics out there.

Filets Mignons – These delicate and refined steaks are usually obtained by cutting the thinner, tapered head of the tenderloin (although the thicker end is also used) into smaller ‘medallion’ shapes of about 1 to 2 inches thick and 2 to 3 inches round. Flavour, succulence and tenderness come from the increased fat marbling in that section of the tenderloin muscle.

So how now brown cow? Feeling jacked and juiced up with all your BBQ steaks insight?  Fantastic! Now you have an intimate knowledge of BBQ steaks, including their origins and characteristics, it’s time to get more hands on. Stay tuned for part 2 of our BBQ steaks blog dropping soon. We will go deeper into the top BBQ steaks, share tips on what to look for when buying beef and of course, how to grill and marinade for that quintessential BBQ steak succulence. Looking for some dirty cooking steak on your BBQ? We’ll touch on that as well.