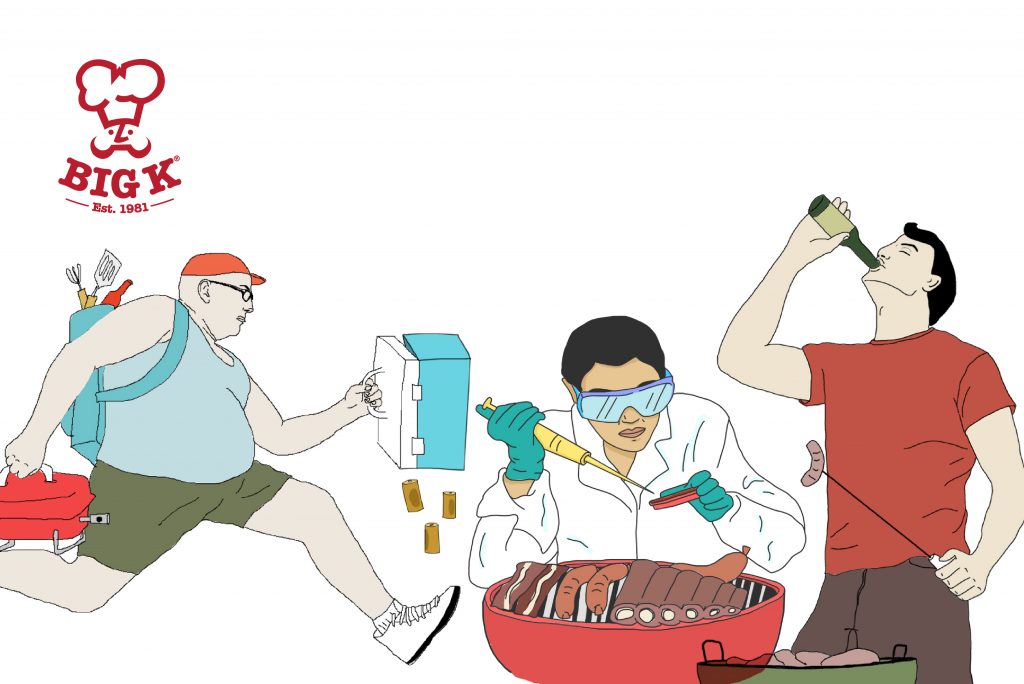 Human beings are infinitely complex. Our DNA and genetic infrastructure may be universal. However the codification and arrangement of these building blocks are unique to every individual. Approximately 23,000 genes pulling together to form the face staring back at you in the mirror. It’s crazy stuff for sure.

We’re not just talking about physical appearance. Yes your genes determine the surface. But what about the internal? How do character and personality come about? We end up at the nature versus nurture debate. Environment battling against genetics. Does one, or the other, or both determine character?  We’re already hurtling down a mental hole at terminal velocity. So the good news is that we’re not actually here to answer the question. We’ll leave that to the better qualified. Rather, for a bit of blog-based fun, we’d like to hone on the idea of personality and how it affects the way that we BBQ.

We’d love to tell you that we actually commissioned a BBQ personality research project. We’re talking both control and test groups exposed to varying environmental BBQ parameters – all overseen by a plethora of overzealous psychologists with clipboards in hand. However that might not have been the best use of our resources. And ultimately we don’t want things to get too heavy, as this is just a light-hearted meander through the fields of BBQ stereotyping after all.

Of course we can’t just dive in without at a little due diligence. There have been many studies done on personality over the last 60 to 70 years. It is an intricately woven tapestry. But much like that curious cat, we have identified a few threads to pull. Essentially there are six main traits that underlie the personality: introversion, extroversion, openness, conscientiousness, agreeableness and neuroticism. These traits manifest in, and are reflected by, the way people think, feel and behave. Much like Picasso holding a gargantuan paintbrush, we’re talking in broad strokes here people.

Ok that’s enough context for now. So let’s set the scene. Summer vibes, sunset and sizzling steaks a plenty. Your senses run free as you absorb every colour and aroma. Scanning your BBQ surroundings your gaze is drawn to that person leaning over the grill. They say never judge a book by its cover (brilliant advice in our book btw), but sometimes (subconsciously and consciously) the brain assesses and forms conclusions. In this case, you see, hypothesise and decide on exactly what kind of griller you are looking at. Massive disclaimer here – this is just a bit of BBQ banter. We love all the grillers out there, and whatever your style, technique or BBQ personality – we salute you. Each to their own and all that. Again, this is just a bit of fun based on a few kernels of truth. Lets get our grill psychology on! 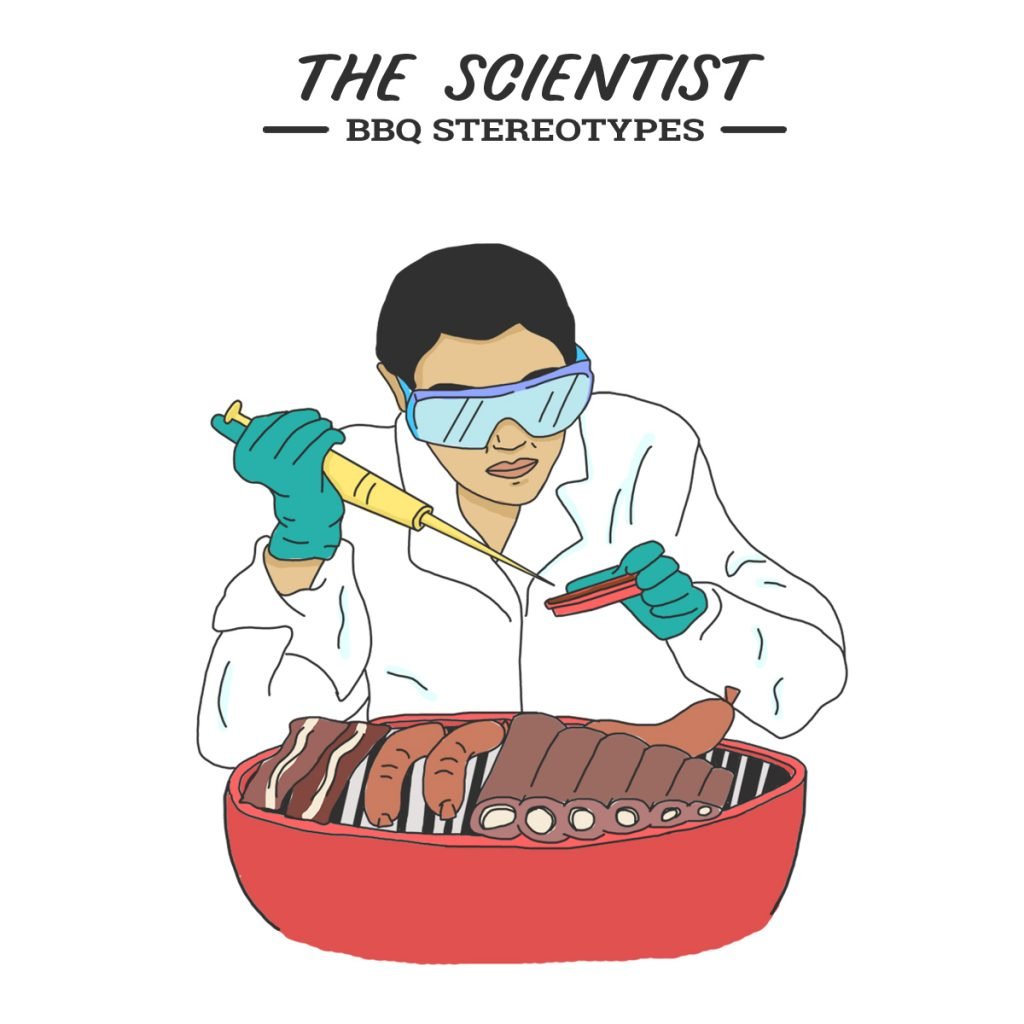 To this guy or gal, it’s not grilling. Rather BBQing is a culinary methodology based on the properties of combustion and thermodynamics.  Every decision is based on physical laws, from Newton’s Laws of Motion to protein synthesis and energy transference. To phrase it differently – for the Scientist there is no freestyling. Each variable is quantified from temperature to thickness of cut. This is totally natural for our scientific BBQ brethren. In fact he or she couldn’t do things any other way. Why? Well once one understands the behaviourial properties of a physical system, anything you insert into that system is a data point affecting outcome. So every centimetre, gram and degree counts. Word of caution here, be careful what you say to the Scientist. Your polite yet somewhat flippant enquiry on how he or she got the steaks to taste so good will result in a ten minute deep dive into marinades and the Maillard effect. If this happens to you, adopt the old nod and smile technique as the Scientist breaks down the intricacies of the chemical reaction between amino acids and reducing sugars. Truth be told, a Scientist’s grill game is usually off the charts.

Ah yes the Documentarian sees the BBQ in aesthetic terms. It’s not so much about flavour and texture, but more about filters and lighting. Every skewer, every plate and every dish is snapped with the rigor of an anthropologist documenting some ancient Amazonian tribe for National Geographic (a bowl of chopped red peppers can’t be that interesting surely?). How will the human race survive without a constant flood of social media imagery? This is the question plaguing the mind of the Documentarian. Hours are spent not watching the grill necessarily, but staring at the phone as their brain searches for the perfect hashtag. At dusk, you can often observe the Documentarian perched precariously on a chair, leaning over the table trying to get that perfect bird’s eye view plate shot for the Gram. 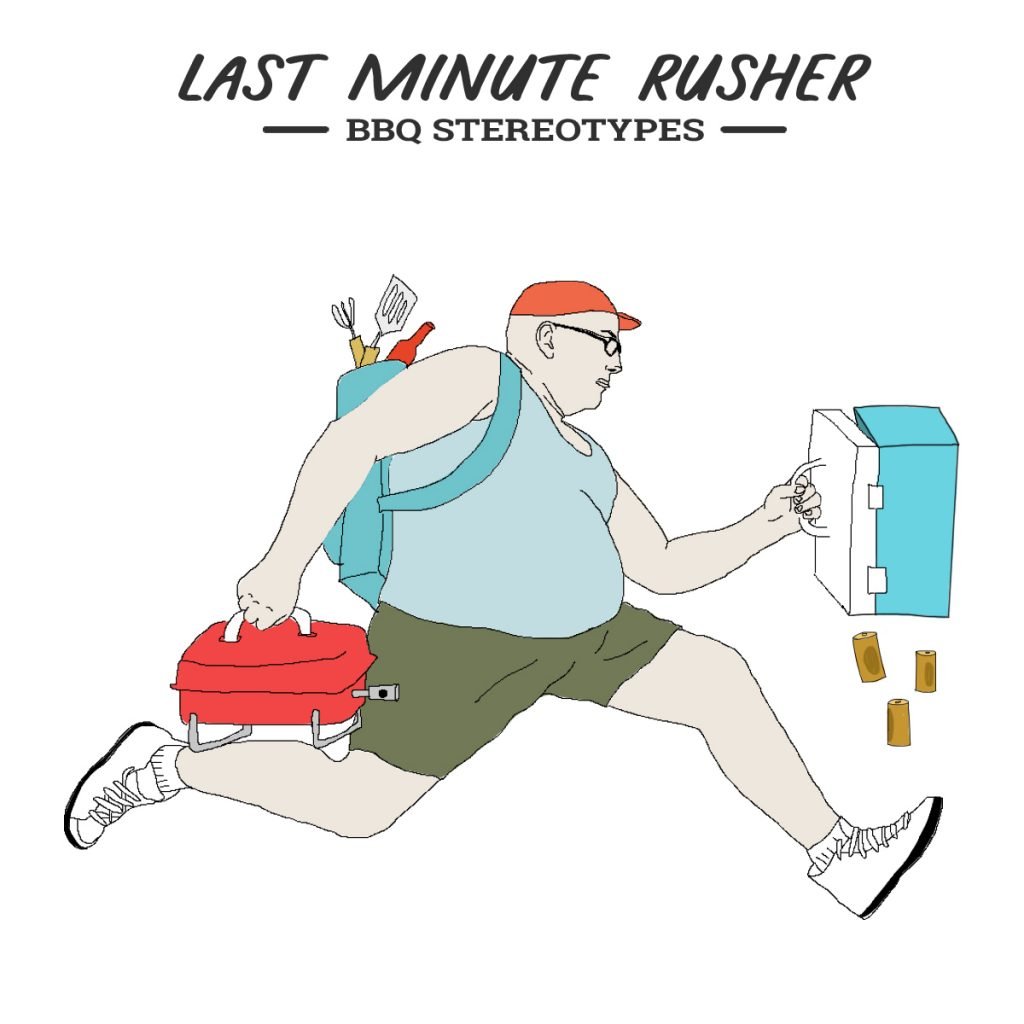 When we observe the Last Minute Rusher (LMR), their BBQ personality is one of emphatic contrast. These guys are always cool and calm in the lead up to their BBQ. For example, you call them in the early afternoon to ask how things are going and what time you should be there. Your questions are met with an almost Zen like tone, as they assure you that they have everything under control (they just need to quickly pop to the shop to pick up a few bits type thing). Then they start waxing lyrical about the Netflix show they are watching. Time is not of the essence for the LMR. After episode 12 they look at their watch and realise people will be arriving within an hour. Cue the mental switch. Suddenly realisation floods the consciousness. This forces the LMR into a mad scramble. In the supermarket there’s no time to ponder, reflect or search for the right things. Compromises are made and random food bought as clouds of temporal anxiety obstruct clear thinking. They go through all this only to return home and realise that they forgot something super important. The irony is that, for about 6 out of 10 LMRs, you’d never know it, as they somehow manage to pull everything off. Much like the swan, clam on the surface yet paddling furiously beneath the water, their peaceful sauntering around the grill shows the world a perfect picture of serenity. But we know the truth.

When a BBQ turns into a total Me-fest, you know you’re in the presence of the Show Off. It’s not a BBQ but a spectacle with a massive ego at its heart. These narcissists love a good name drop so brace yourself for some seriously self indulgent anecdotes about Jamón íberico forged in the smoking rooms of Andalucía and UK grass fed tenderloin derived from cattle grazing in the lush rolling fields of Shropshire The Show Off craves attention, so we’d bet the Big K house on the grill being at the center of the space with guests getting a 360-degree view of the maestro at work. The Show Off is so lost in their own delusions of grandeur that they grill with all the seriousness of someone searching for a COVID-19 vaccine. This shows itself in deeply furrowed brows of concentration, sultry stares into the grill and wildly over emphatic hand and arm gestures. Are you adding a little oregano to your lamb joint or making the Statue of Liberty disappear? Come on guy, you’re not David Copperfield. 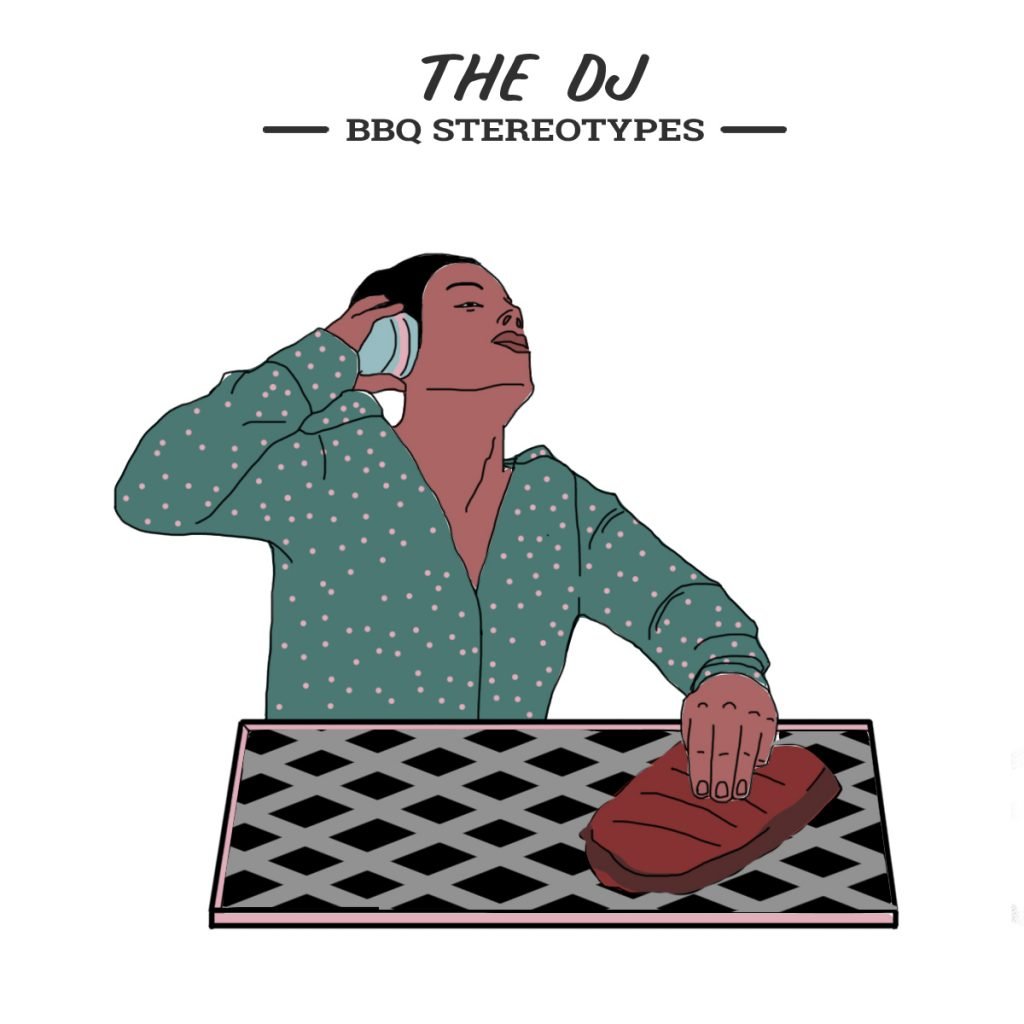 Is it a BBQ or a rave or both? The DJ lives in this grey area of BBQ experience. Rather than complimentary courses, you’ll be treated to complimentary playlists. Chilled ambient beats to begin, sunny afternoon dub and reggae vibes, evening minimal tech and bass. The sonic landscaping is meticulously cultivated to augment the DJ’s BBQ. We’re not knocking the DJ here. After all, the right tunes can really make or break the energy and vibe of the BBQ. However when more attention is paid to melody rather than meat, and tunes rather than temperature, the culinary outcome could be a touch dodgy. If you see any speaker set ups, multiple tweeters and woofers, and a furiously gyrating individual sporting superfluous Beats By Dre headphones, you’re defo in the realm of the DJ.

There’s no doubt that the Disclaimers are a nervous bunch.  Nothing is quite good enough, there’s always a backstory behind every detail of preconceived imperfection. Perhaps an inferiority complex or feelings of inadequacy drive the Disclaimer forward. How to spot a Disclaimer? Well they usually won’t be eating their creations. Instead they will be dissecting every detail in an audible stream of consciousness. “I couldn’t get the meat I really wanted from Blemly and Sons so I had to settle for the supermarket stuff. Is it a little tough? How’s the salad? I can never quite get courgettes to taste. You don’t have to eat it you know. The coleslaw’s too creamy isn’t it? I parboiled the potatoes too long so now they’re overcooked.” The narrative goes on and on. Despite your countless reassurances to the point of exhaustion, the Disclaimer pushes regardless. Once they’re burnt out, a hush ensues as they take things internally. Observe their vacuous stare as the Disclaimer replays everything in their mind, lamenting every decision made. More often than not the BBQ was actually quite delicious. Good luck convincing the Disclaimer of that though. 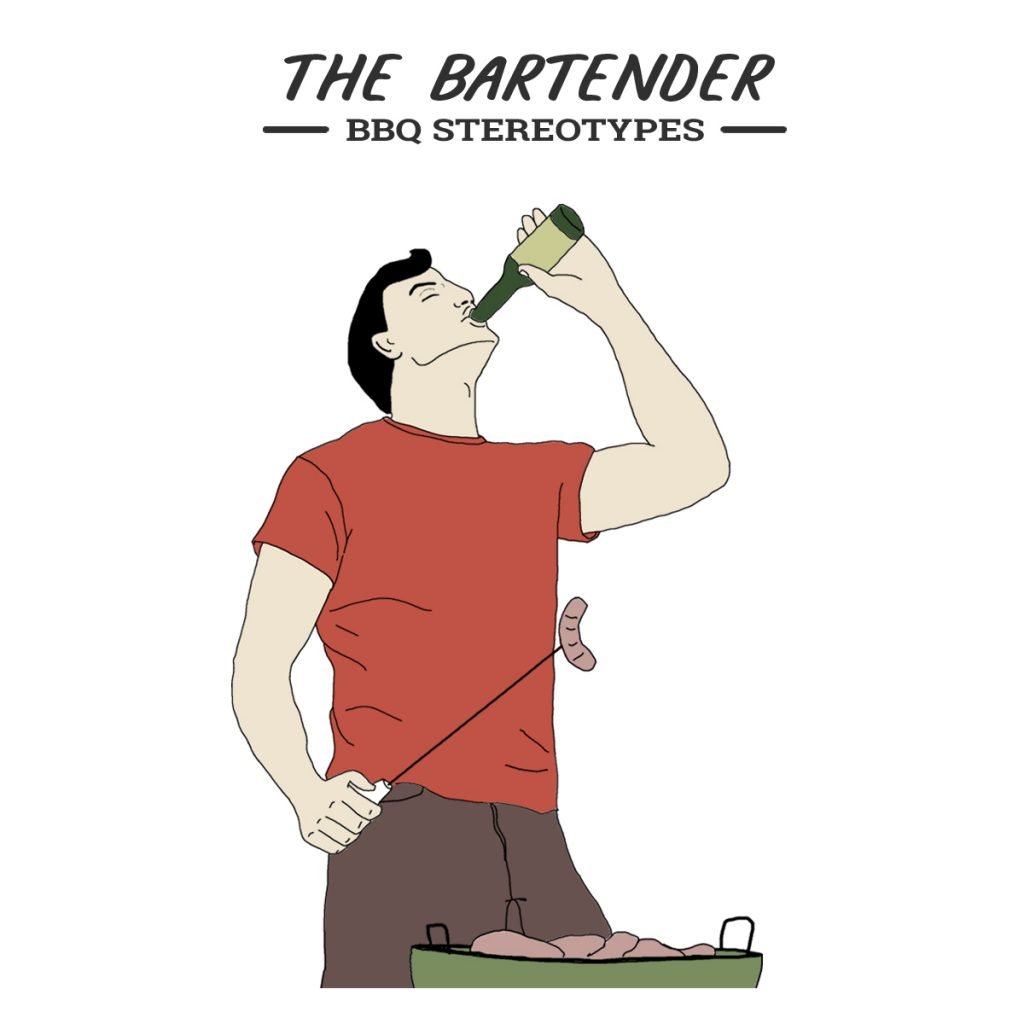 Liquid nourishment is the principal motivation of the Bartender. If you have beverages on the brain, the experiential gold lies in matching the perfect drink for every BBQ moment.  Shots on arrival, a mix of reds to match the steak, a punch bowl with the potency of an industrial window cleaner for the wait between servings – all finished with a selection of whiskeys for the post mastication carnivore coma. In many cases the Bartender will demonstrate great feats of engineering and ingenuity, creating make shift bar structures, complete with ice storage capabilities and categorical bottle organisation. Expect an extremely ‘festive’ experience (and a potential hangover) when you rock up to the Bartender’s BBQ bash.

Welcome to a mental mix of Rain Man and Chess Grandmaster Garry Kasparov. The Strategist first analyses the full picture, taking into account every variable from every angle – the weather, location square footage, number of guests, carnivorous versus herbivorous split, RSVP response window to name a few. All these elements are fed into the Strategist’s mental computer. Within this cerebral programming, each consideration is juxtaposed with, and tested against, a series of desired BBQ outcomes until a set of clustered actions and objectives appears. The strategy lies in the most practical and efficient arrangement of these actions and goals. This is strategic Nirvana. You’ll know a Strategist when you see one. They will be calm and collected, gliding effortlessly between guests and the grill with the light footed mastery of a Gazelle frolicking on the planes of the Serengeti.

These ethereal BBQ creatures are the stuff of myth. The Ghost is occasionally, if ever, seen. They exist in glimmers, locked away in a kitchen a million miles away from the actual grill, desperately trying to get things done. Talk about tunnel vision. Ghosts get so lost in the minutia of the delivery of their food, they forget about pretty much everything and everyone else. Lack of preparation and planning, coupled with a dose of underestimation, often plague the Ghost. Hence why they eventually end up hidden behind closed doors intensely trying to salvage their food. How can you spot a Ghost? You won’t and that’s the point.

Do you see yourself within any of these BBQ stereotypes?  It’s perfectly ok if you want to take a moment for some soul searching and self-refection. Happy pondering. See you on the flipside.