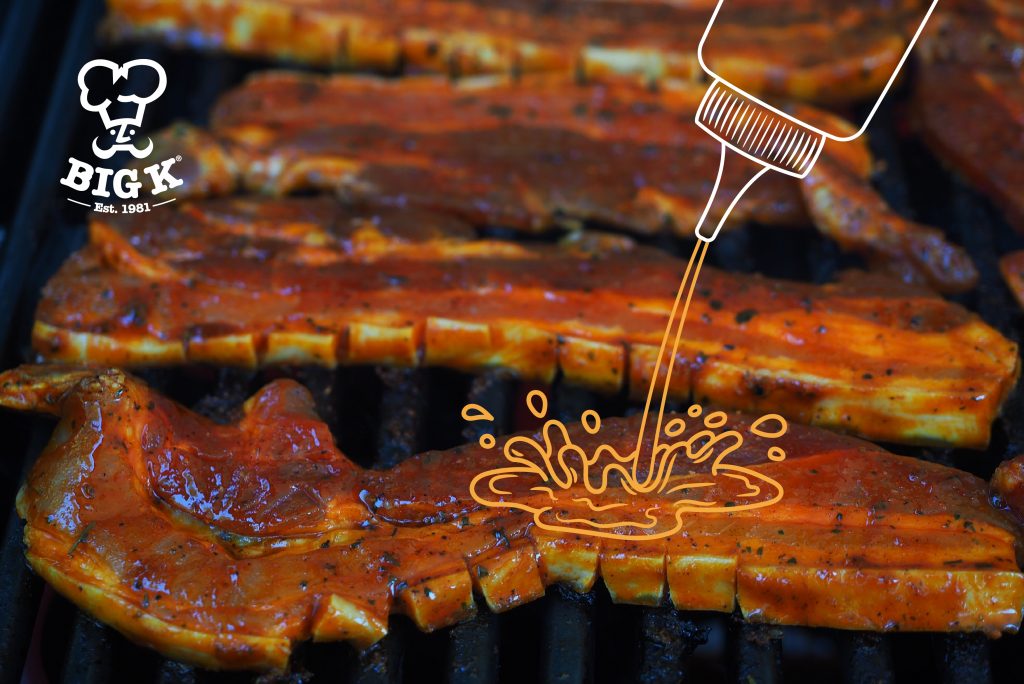 In life there are those in the limelight and others in the shadows.  We know the people front and centre. We see how they operate, we know who they are and what they stand for. Yet the introverted remain somewhat more of a mystery. We know them on a superficial level sure. But their backstory, purpose and contribution in life is misunderstood or unknown entirely. The link between this concept and barbecue sauce may seem tenuous but we’ll bring everything together with some rhetorical prowess no problems. Let’s get back to it.

Take that famous computer behemoth with a fruit based logo. Ask your average Joseph and Jacky Bloggs about this tech giant and we’re sure they will mention Steve Jobs straight out the gate.  But a name you might not hear as much is Steve Wozniak. He is an electronics engineer and programmer as well as the co-founder of the company. Wozniak was a key player in the personal computer revolution, developing and programming Apple’s first two waves of revolutionary computer products. He changed life as we know it. Yes Jobs was the face of the brand so he receives the plaudits – rightly so. However many argue that Wozniak was the true product genius. The brains behind the business. But often his role is perceived incorrectly or he is simply incognito in the narrative. This concept is mirrored in the relationship between BBQ food and sauces.

While we all know a lot about our steaks, burgers, chicken and ribs, barbecue sauce and other members of the sauce family fly under the radar. People eat and enjoy these saliva-inducing sauces but often know little about them – their ingredients, backstory and evolution. They are a key and complimentary factor in the BBQ taste experience that many simply take for granted with a simple squirt or splash. Well toady it’s time for barbecue sauce recipes to shine. Let’s go Big K fam fam! 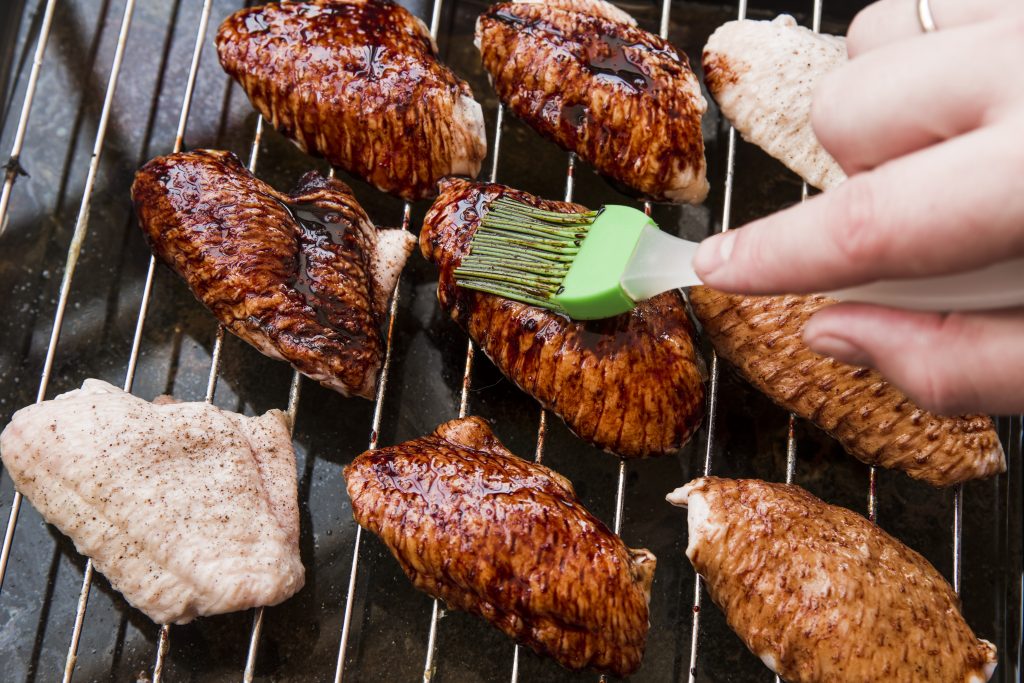 Relax our overzealous friends. We will unravel the secrets of how to make barbecue sauce soon. First up, as is the Big K custom, a little wonder through the ethereal sands of time. The notion of spreading sauces on food dates back a looooong way. Way before barbecue sauce was even a glimmer in Mother BBQ’s eye, something saucy was stirring. It was a natural evolution in a culinary chronology. First up, some bright ancient ancestor discovered that smoking meat helped preserve it. Then another sharp tool realised that soaking meat in seawater helped maintain it.  Other ancient visionaries stumbled upon the benefits of packing meat in dried salt as well as leaving it in the sun to increase longevity. With all these tricks and techniques, the meat usually became very dry and chewy. Then one particularly industrious prehistoric chef had the brain wave to moisten and freshen meat destined for funky town by basting and soaking the flesh in wine, vinegar, salt and oils. Over time some tinkering was done to the formula, with everything added from blood, milk, water, various oils and fruit pulp. Sauce took its first steps.

The birth of barbecue sauce.

Let’s take a moment to reduce hundreds if not thousands of years of sauce evolution into a few sentences. In 239 BCE Chinese Chef I Yin mentions the harmonious blending of sour, sweet, bitter, pungent and salty in sauces. Then in 25 CE a Latin poem describes a farmer making a sauce from herbs, cheese, oil and vinegar. The famous Roman cookbook Apicius, from the 4th or 5th century, contains about 100 recipes using sauces. We could go on but we know you want to get to that sweet and sticky barbecue sauce goodness. Spinning the temporal wheel forward to 1492, Spanish voyagers (while exploring the New World) stumbled upon the Taino tribe. For nourishment, these early BBQ enthusiasts smoked and grilled animals over a fire pit using a basic wooden device.  The Spaniards coined the primitive cooking technique ‘barbacoa’ and integrated the technique into their culinary repertoire. This was the BBQ foundation from which barbecue sauce was born some 40 odd years later. Want to know how to make barbecues sauce? Patience patience. Let’s swim into the sea of barbecue sauce a little further.

Hernando de Soto landed near what we now know as Tampa Florida in 1539. This expedition was no light frolic. Soto was serious, bringing nine ships, 600 men, hogs and vinegar – the perfect expedition posse to help in the search for gold and silver. In between the pillaging and plunder, Soto socialised with the native tribes (slaughtering a few we might add), gorging on many a barbacoa. During one of these feasts, the serendipitous BBQ stars aligned, bringing together smoke, pork, vinegar, chillies, molasses and peppers. Ladies and gentlemen, meet the barbecue sauce prototype. This tangy barbecue nectar evolved over the following centuries, forming regional permeations as it travelled via colonisation.

The first reference to something resembling a more contemporary interpretation of barbecue sauce can be found in the Bolivar Bulletin from Hardeman County, Tennessee in 1871.  At this time barbecue sauce was mostly butter and vinegar seasoned with salt and black pepper. As the years progressed ingredients such as tomato sauce, Worcestershire sauce, Tabasco, honey, mustard and catsup entered the mix. Commercialisation soon came calling and the first bottled barbecue sauce was made by Louis Maull of St Louis in 1948. However H.J Heinz is credited with the first mass rollout on a large scale 22 years later. Who’d have thought that lovely, viscous, yet unassuming, barbecue sauce had such a rich and compelling history? The pages of the past are always fascinating, but you can’t eat them. Lets get those hands sticky with some practical barbecue saucery. 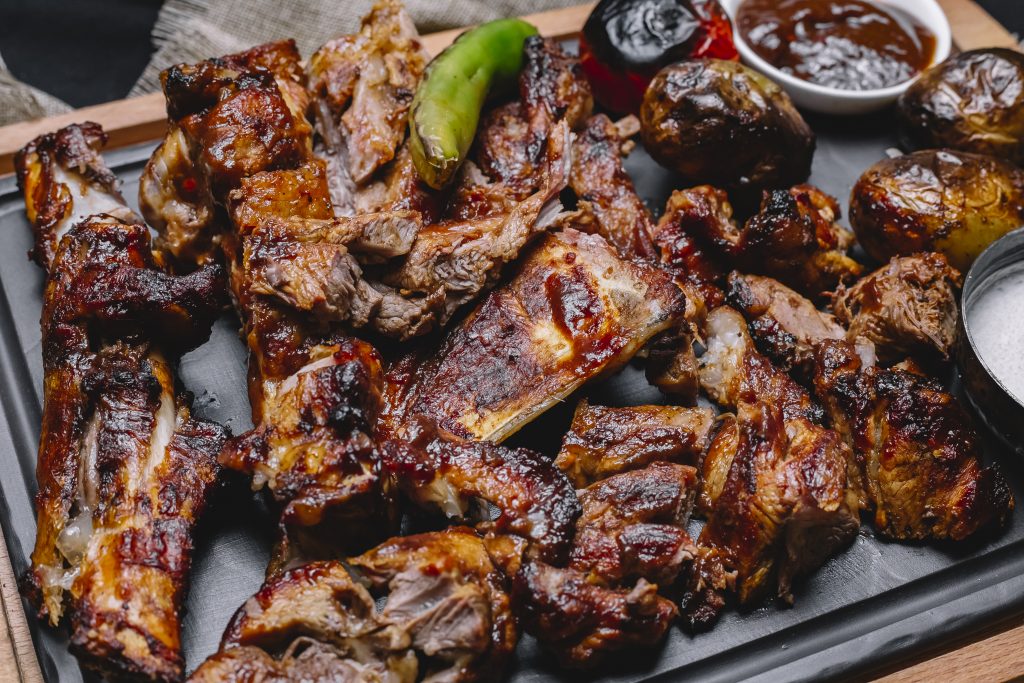 Barbecue sauce is BBQ blessing without question. Yet despite it’s complex history and evolution, it’s actually very simple to make.  Yes it is a tangy elixir of deliciousness, but you don’t need to get lost in the depths of BBQ alchemy to make it. See below for the info.

Start with a can of chopped tomatoes or some ketchup.

Add a dash of Worcestershire sauce.

Simmer the mixture until it reduces down to a thick sauce.

Mix ¼ pound of butter with ¼ cup of water

Include a dash of cayenne

Mix in some chopped parsley

Mix in ½ teaspoon of onion salt

Simmer the mixture until it reduces down to a thick sauce 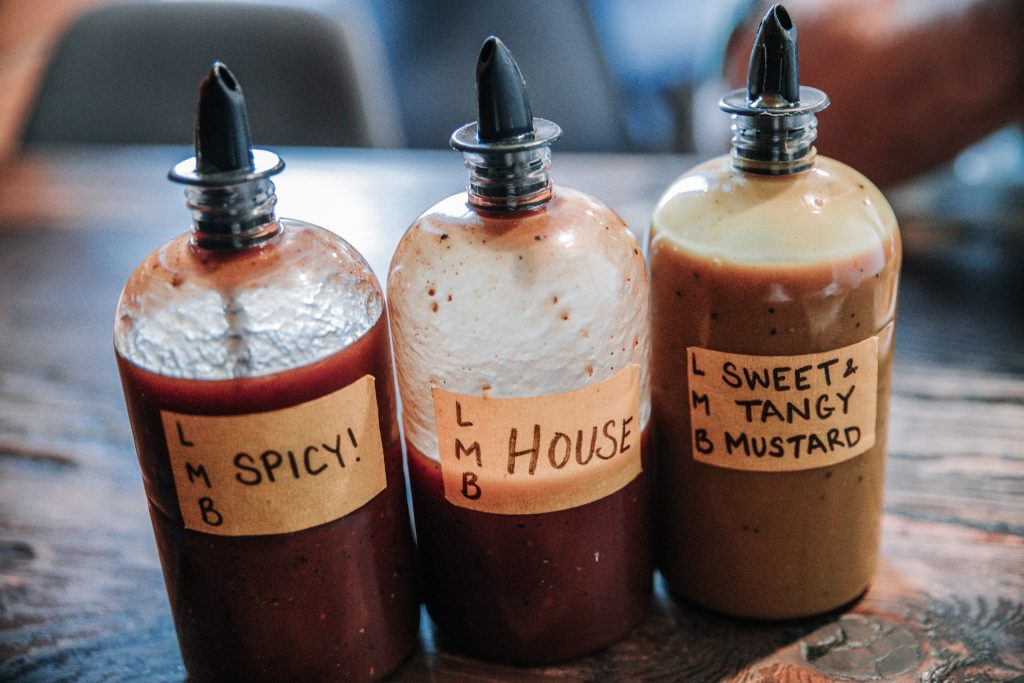 Taking its name from its birth town, Kansas City, this barbecue sauce is rich, sweet and tangy. It pairs perfectly with ribs as well as all the usual BBQ suspects. The recipe is very similar to the basic barbecue recipe above, but swap out the Worcestershire sauce for Molasses and add a spice mix of garlic powder, black pepper and a generous amount of cayenne pepper.

Southern Style barbecue sauce is slightly thinner and not as sweet as other barbecue sauces. However it still packs a hefty flavour. This sauce is best slathered on beef, pork and chicken and it will leave your BBQ guests licking their fingers for an eternity (which might be a strange site when they are back at work #justsaying). To make your very own Southern Style barbecue sauce, start with a ketchup or fresh tomato base, then add vinegar and sugar, as well as a splash of lemon juice and Tabasco sauce. Finish up with some paprika, cayenne pepper and garlic. Finally, for a Texas twist, add a beef stock cube for that instant meaty richness. Then simply simmer until the sauce is thick and nom nom ready.

There are multiple branches stemming from the variety tree, let’s go out on an experimental limb.

A cola-based barbecue sauce could be just the thing. The sweet yet slightly sharp flavour of the cola forms the foundation of the barbecue sauce, complimenting the other ingredients. Here’s a saucy secret for you: use flat cola as opposed to fizzy cola. Carbonated drinks can create a real mess when you cook them. Once you have your flat cola ready, heat it up with a little ketchup, white vinegar and spices to your taste. Sweet side note here – this cola barbecue sauce recipe has a very high sugar content, so it is bet used as a table sauce

Keeping with the concept of beverages why not try adding bourbon or rum to your barbecue sauce base for a little kicker? We recommend a honey, bourbon, jerk seasoning combo. This plethora of sauce-based OMG ingredients delivers a gorgeously sweet sauce with warming heat. Jerk based barbecue sauce recipes also pair perfectly with grilled vegetables like pepper, aubergine and courgette. 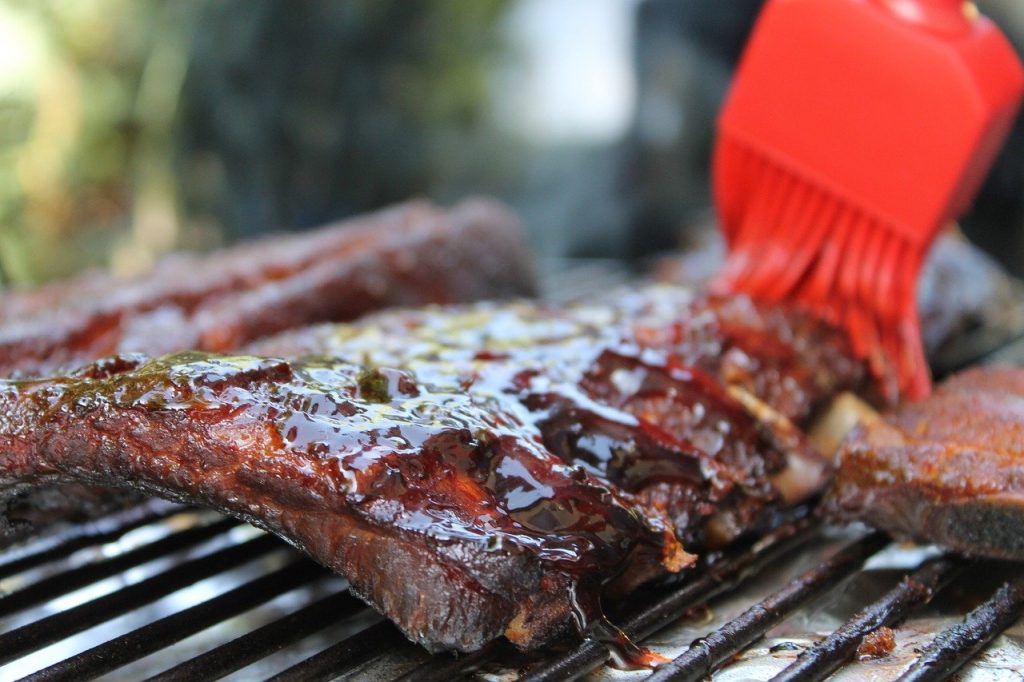 How to cook ribs with barbecue sauce?

We get it. With all this newly acquired sauce knowledge, you’re itching to get your grill on. Banging out some ribs is a great way to go. Now we can’t put any recipes here in depth, thanks word count, however we have your back as always. Check out our cheat American style BBQ smoky pork ribs recipe  or this amazing BBQ short ribs recipe or try your hand at some tender barbecued back ribs. What we can do here is get into the why and the when. In other words we’ll share the exact moment to add your barbecue sauce to your ribs and the reasons for doing so.

Never lose sight of the BBQ endgame, crispy, golden brown and well-seasoned skin with fantastically juicerific meat concealed within. So performing some kind of BBQ baptism on your ribs before cooking isn’t the way to go – sounds tempting though. Yes we’re talking about controlling your barbecue sauce impulses here, however the actual reason is more objective and scientific. Your frenetic slathering and splattering with affect the chemical reaction known as the Malliard reaction. In layman’s terms, the water in your barbecue sauce will hamper the browning and crisping process. The reality is that once you start grilling, your dripping wet ribs could very well go up in blaze of glory. Basically you want to cover your ribs in barbecue sauce about 20 minutes before they are done, then apply 3 more coats, one every five mins or so.  Applying your sauce late in the BBQ day ensures that you don’t actually cook it. You just want your barbecue sauce to bind with the skin, reduce and form a gorgeous glaze.

Well there you have it or as we like to say Robert is your father’s brother! Barbecue sauce secrets unravelled and revealed. We know you’re thinking saucy thoughts, so go get sticky with some barbecue sauce fun and frolics. Peace.

Spend over £30 to get free 48 Hour delivery* Dismiss