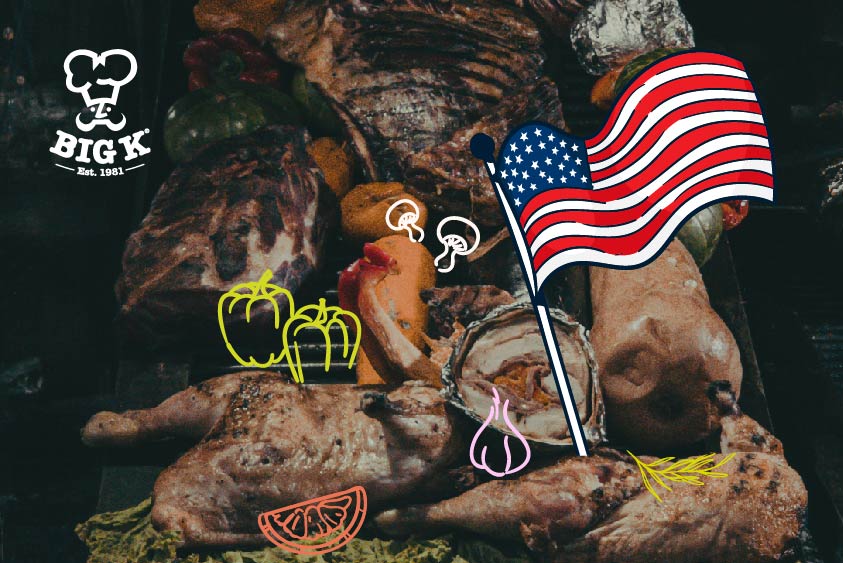 It’s time for an historical BBQ flashback. Skipping back a few centuries we arrive at the Caribbean in the mid sixteen hundreds. You are a European explorer adventuring into the unknown. New lands not yet on maps. New environments and cultures. New people and traditions. One day you see some locals cooking animals in a pit over smoke and fire. It is a sight unlike anything you have seen before. You are at the contemporary BBQ singularity. The catalytic moment that kicked off both the American style BBQ and the wider modern BBQ concept in the West. Yes all you intrepid Big K explorers welcome to part 1 of our American Style BBQ exploration blog series. Let’s look into lovely ‘low ‘n’ slow’ cooking and how it has changed the BBQ game.

What is American style BBQ?

Forget hotdogs and hamburgers. These delectable delights appeared much later on the American BBQ scene, as a quick and easy option for rabid consumers in the home barbecue market. The authentic American style BBQ is embedded in the cultural DNA of the nation dating back to 1672 and even earlier.

To BBQ American style is to indulge in a little hot smoking – this is also known as cooking ‘low ‘n’ slow’. Basically the process involves cooking meat in a smoke-filled chamber using indirect heat for anywhere between 3 to 24 hours plus. What’s the culinary aim? To transform tough cuts into tantalizingly tender treats. Here are some American style BBQ classics: beef brisket, whole hog, pulled pork shoulder, beef brisket and pork ribs. Can you please place a bucket under your mouth to capture all that drool? Ok moving on, we’re going to unpack some US BBQ history, smoking techniques, ideas and of course, American style BBQ grill recipes 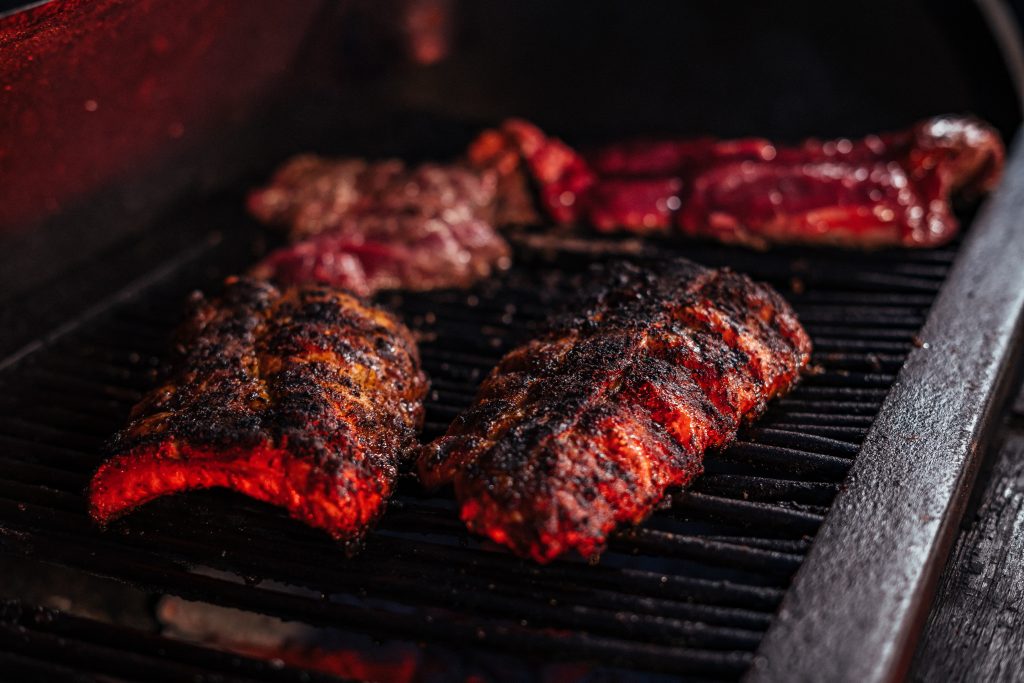 Do you know about American BBQ culture/tradition?

You know us by now: we never dive into the particulars without a little context. The same goes for exploring BBQ American style. Once we have the wider frame of reference, the details take on new meaning and significance. So let’s examine the cultural evolution of American style BBQ.

As we alluded to in our epic scene setting intro, American style BBQ has its roots in various Caribbean cultures. During the initial boom of colonisation and discovery, European explorers encountered the Taino Indians. This ethnic group had perfected the art of cooking meat over smoke and fire in a pit.  In their native tongue, this cooking technique was called ‘barabicu’ which means ‘sacred pit’.

Now enter the Spaniards. They embraced this style of fire pit smoking and renamed it ‘Barbacoa’. During their northern press into the American landmass, they took the BBQ art form with them, spreading and enhancing its popularity in the now southern states of North Carolina, South Carolina and Virginia. Following a further Western migration, tracing the edge Gulf of Mexico and eventually up the winding Mississippi river, ‘barbacoa’ evolved. Geography influenced outcome with local variations of BBQ springing up all over the place.  Fast-forward to today and the American style BBQ epicentre is the southeast of the country, specifically an area surrounded by Texas and Oklahoma on the west, and Kentucky, Missouri and Virginia on the north. 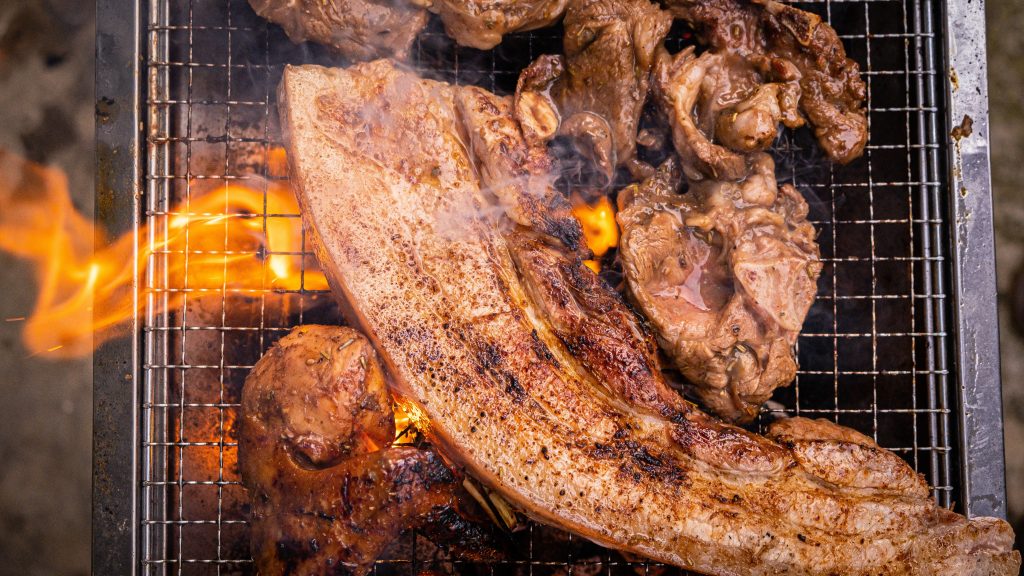 American style BBQ grill recipes? Get to know the 4 main players in the game

Yes there are many regional nuances and permutations when it comes to a BBQ American style. However there are four principal players in the regional American BBQ sub culture.

In Memphis, Elvis and pork have equal standing. Honestly they are crazy for pork ribs, shoulder and whole hog. Another distinctive Memphis American style BBQ staple is the rub. Basically Memphis meat is rubbed down with a dry rub containing anything from 3 to 45 spices! Paprika and garlic are 2 non-negotiables in the Memphis rub mix. Finally you should know that that Memphis style ribs come with BBQ sauce on the side, not slathered on the meat. This is to emphasise the dry BBQ style and accentuate the fusion of rub and meaty flavours.

Enter the beef capital of the USA. In Texas smoked brisket rules the BBQ roost. The cut comes from the cow’s lower chest, so the muscle is fairly tough. This means brisket must be cooked low n slow for very long periods of time. Pork ribs and sausage are also big hits with the Texans.

There are four main types of Texas BBQ. East Texas style is all about slow cooked meat falling off the bone. The meat is usually smoked over hickory wood and marinated in a sweet, tomato-based sauce. Central Texas is deep in the rub realm. Meat is often rubbed with a simple salt and black pepper blend then cooked over indirect heat from pecan, oak, or mesquite wood. No sauce needed. When you wonder through West Texas you will feast on a simple direct heat American BBQ style using mesquite wood. Finally South Texas style focuses on magical marinades. We’re talking thick, molasses-based sauces that keep meat moist.

When it comes to Kansas City BBQ variety is definitely the spice of life. All kinds of meat, from pork and beef, to chicken, turkey and lamb, are given the Kansas City treatment. Kansas City American style BBQ boats a plethora of tasty sides including special baked beans and coleslaw. Sweet BBQ sauce is very much the Kansas City trademark. Usually you’ll find this BBQ sauce is a mix of Ketchup and molasses, with a smoke infusion, as well as Worcestershire sauce, brown sugar, vinegar, soy sauce, and other spices.

Our final stop is Carolina. In this beautiful place, pork is cooked low ‘n’ slow for a very long time and then pulled, shredded, or chopped. Often it is rubbed with a spice blend before smoking and drizzled with a vinegar and spice liquid during smoking. Many say Carolina style BBQ is the oldest and most tradition form of American style BBQ. The wood used for smoking is mostly hardwood such as hickory or Oak. 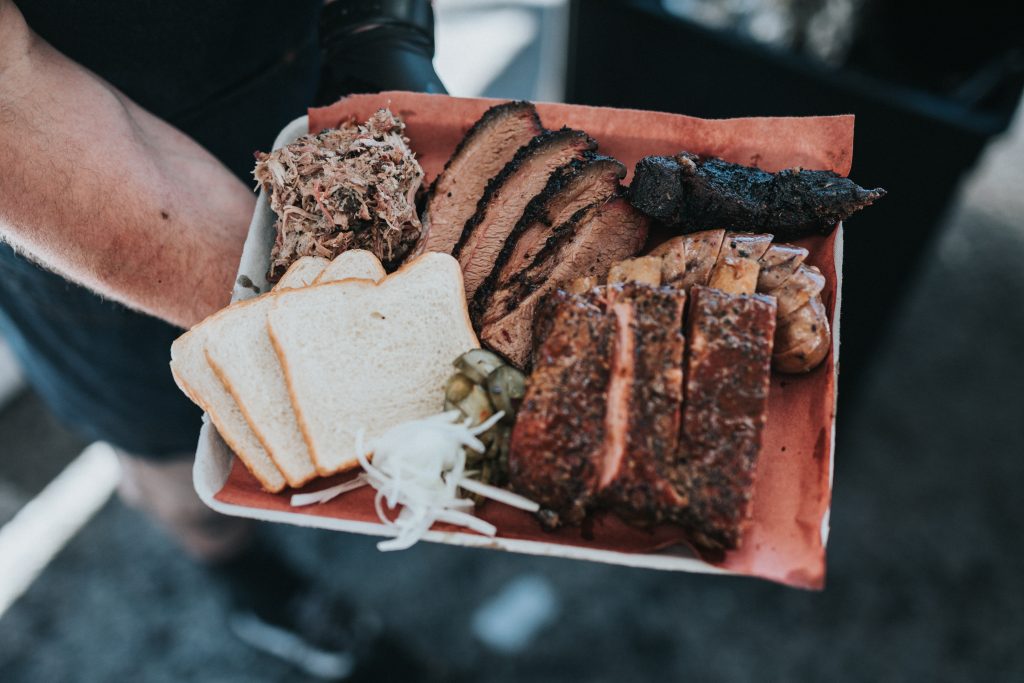 Yes we have plenty of recipes to help you BBQ American style. Delicious ribs, BBQ sauces, rubs: however it is worthwhile really understanding the main components that make up BBQ American style. Once you know these, you will have a deeper understanding of the process – allowing you to experiment and enjoy with confidence. The four essential elements are your meat, cooking technique, wood smoke and your BBQ sauce, marinade or rub. 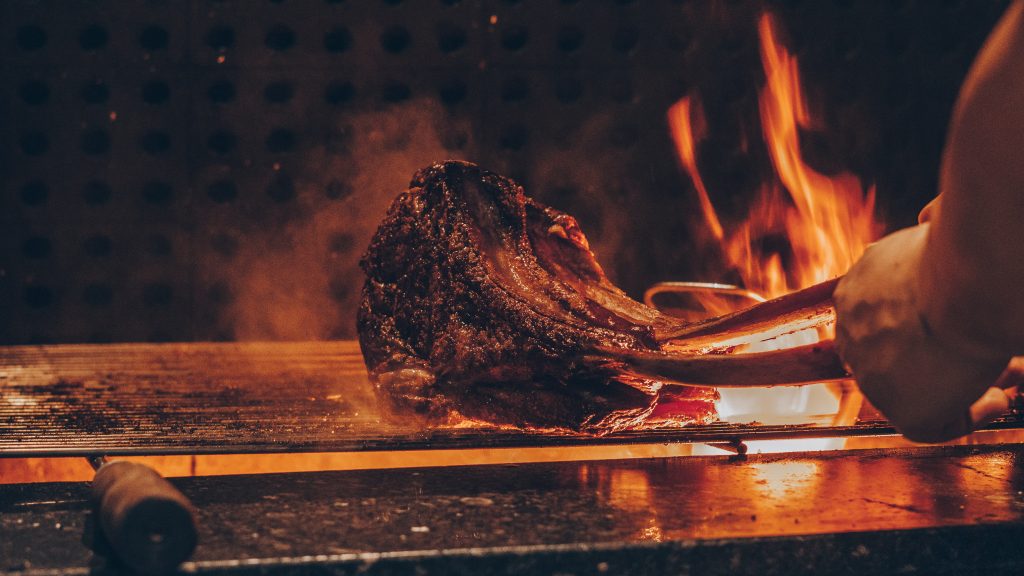 As we’re sure you can now decipher, meat choice plays a crucial role in American style BBQ. Are you fixated on some beefy brisket? Or perhaps some pulled pork is on your cerebral menu? Once you have chosen your meat, you can cross-reference your selection with one of the four main styles of American BBQ, seeing which style best fits your cut. This will help keep things authentic and achieve the best synergy between texture, taste and technique.

Now that you’ve chosen your meat and American BBQ style: what’s next?  The cook of course! This is the key to unlock the American style BBQ puzzle. In the interest of time and clarity we will jump into the two main players  – hot smoking and smoke cooking.

Hot smoking for the real deal

We know that many people are seekers of culinary authenticity. If this sounds like you then we would definitely recommend hot smoking for the true blue American style BBQ experience. Hot smoking is all about cooking your meat in a smoker, using an indirect heat source of wood fire. This indirect eco system creates lower temperatures ranging between 120°F to 180 °F (50 and 80 °C). This is what we call a proper low ‘n’ slow cooking environment.  Your cooking times should vary between 4 to 18 hours depending on the meat and American BBQ style you have chosen. Patience is a virtue here people. On the plus side, once you have started everything there is minimal intervention required on your part.

Smoke cooking for a quick imitation

Not everyone has hours and hours to channel their inner John Wayne and indulge in some 100% authentic low ‘n’ slow American style BBQ. The good news is that we’ve got you quicksters covered too. Smoke cooking is a fantastic method of experience that American style BBQ smoky goodness without the temporal constraints. If you want smoke cook, you basically just cook your meat over a mix of charcoal and wood chips, using an indirect heat output, at higher temperatures of about 250°F (121°C) ±50°F (±28°C). The whole cooking process should only take between 2-4 hours – perfect for all you busy bodies out there.

3) The wonderful world of wood

We’re sure that you know the Big K way when it comes to wood. We are experts in the field, or perhaps in this case, the forest.  You can take a woody adventure right here and school yourself. The point is that each type of wood has different material properties and chemical compositions leading to different burn characteristics.  When it comes to BBQ American style, wood plays a pivotal role in the smoking process. As the wood burns it emits smoke that infuses into the meat crating different flavours and textures. It is this process that distinguishes smoking from regular grilling. If you want a super detailed deep dive on all things smoking and American BBQ smokers, check this out Now that you know a little more about the significance of wood in American style BBQ, let’s get into some detail.

Sweet and soft flavour – You should be looking to fruitwoods such as apple, cherry or pear. Alternatively reach for some alder, pecan or maple.

Smoky and strong flavour – Time to pick up the hard wood like oak, hickory or mesquite.

In terms of creating a complimentary match between wood and meat, a general rue of thumb is that sweeter woods are better for fish and poultry, whereas stronger woods are ideal for some beef and pork action.

4) Choose between rub, sauce or marinade

On the one hand, the American BBQ style that you choose will often dictate whether you go for BBQ sauce rub or marinade. However the great thing about BBQ smoking and grilling in general is that nothing is set in stone. There’s always some wiggle room for experimentation and a little free styling. For example American style BBQ sauces can be sweet with molasses or punchy with a peppered vinegar and tomato base. Rubs come in all mix types with endless combinations of herbs and spices on offer. Even marinades are super diverse, delivering varying levels of fleshy penetration depending on the type of marinade and meat used. Want to know more? We’ve got you – peep all these amazing blogs on rubs, marinades, and American style BBQ sauces.