Your American BBQ guide is here. Get to know low n’ slow 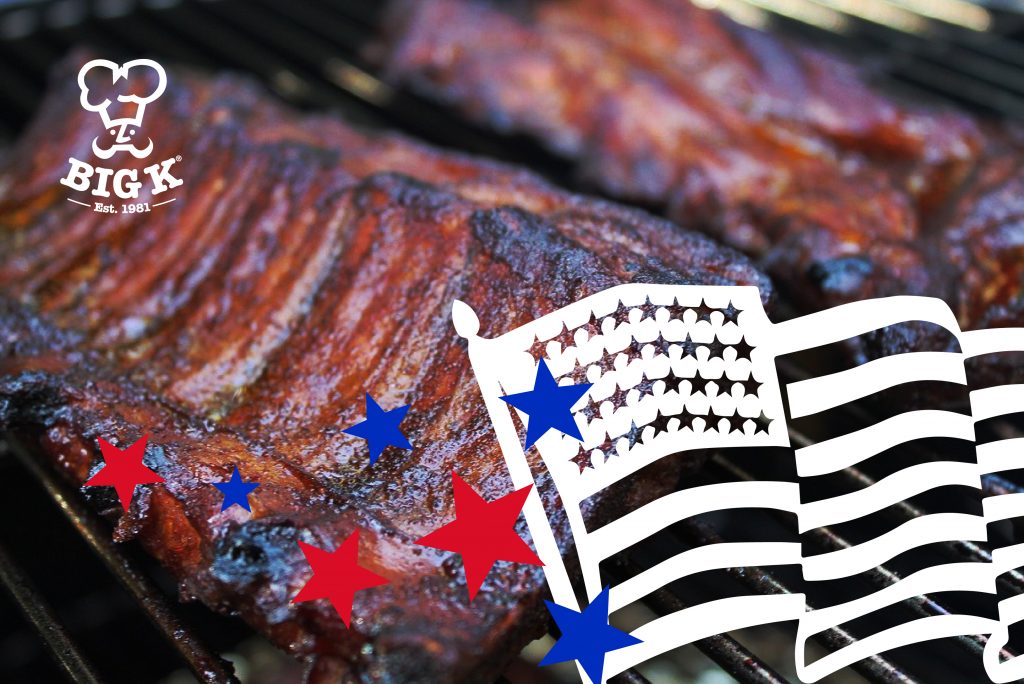 George Washington is a universal figure known throughout the world. He was one of the Founding Fathers and the first President of the United States. In between sowing the seeds of democracy and inspiring the masses, he has another claim to fame. In 1796 the American icon mentions attending a ‘barbicue’ in Alexandria Virginia. This was the first time the BBQ concept was legitimised by a person of such stature and authority in American culture. The American BBQ love story began. 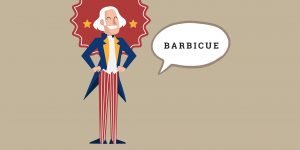 When we talk about American BBQ we’re not referring to hamburgers and hotdogs. These palette pleasers emerged onto the American BBQ scene a lot later, popularised by advertising, film and the fast food boom. Authentic American BBQ is something else. A fully-fledged sub culture steeped in history and tradition, dating back to about 1672 with even earlier roots.

The true blue American BBQ, is all about hot smoking – otherwise known as cooking ‘low ‘n’ slow.’ This means cooking meat, from anywhere between 4 to 24 hours, over a low indirect heat in a smoke-filled chamber. The most famous dishes are whole hog BBQ, pork ribs, pulled pork shoulder and beef brisket. American grilling is about taking the tough cuts and transforming them into tenderized taste-filled terrificness.  We’re going to take a journey into the American grill looking at all things American BBQ, from the history and evolution, to cooking techniques, methods and American Style BBQ grill recipes.

A brief history of the American BBQ

The American style BBQ was born from multiple cultures in the Caribbean. How? Well early European explorers travelled to the region and saw Taino Indians cooking animals over smoke and fire. In the Taino language the culinary ritual was coined ‘barabicu’ which translates as “sacred pit’ in English. The Spaniards renamed it ‘Baracoa’ and these intrepid explorers eventually moved north spreading and popularising ‘Baracoa’ in the current day southern states of the US – such as Virginia, North Carolina and South Carolina. Soon the country expanded westwards along the Gulf of Mexico and north along the Mississippi River, as did the BBQ phenomenon, the latter taking on new regional evolutions. Today the main American BBQ heartland is the southeast region of the country, an area flanked on the west by Texas and Oklahoma and on the north by Missouri, Kentucky, and Virginia.

The regional intricacies and incarnations of American BBQ are many and multiple. However there are some regions that wear the big boy BBQ trousers. 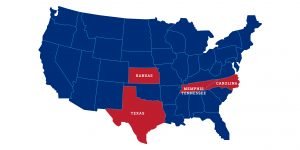 Carolina-style BBQ obviously takes its name from its birthplace – the states of North Carolina and South Carolina. Down south pork is king. A whole hog is cooked over a pit until super tender. Then pork meat is chopped or shredded or “pulled.”

Move over pork. In Texas beef reigns supreme. Two words – smoked brisket. The brisket cut comes from the lower chest of a cow, consisting of the chest and shoulder muscle. Thick and tough, brisket must be cooked for extended periods of time at lower temperatures. Rubs, not sauces, rule the roost in Texas. The lack of sauce accentuates the flavours of the mix of herbs and spices, seasonings, meat and wood smoke.

Yes Elvis lived there. However Memphis, Tennessee, is the spiritual home of the sweetest BBQ sauce around. Think tender pork ribs smothered in thick Memphis-style sauce. The secret to the sweetness? Molasses – thick, dark syrup made from raw sugar.

Dorothy may have been sucked up into an inter-dimensional tornado, but Kansas City has another famous resident – mixed BBQ.  That’s right folks, Kansas City the place where American BBQ boundaries blur. Southern style pork meets Texas style beef, with both pork ribs and beef brisket on offer.

So you want to try your hand at a little hot smoked ‘slow and low’ American BBQ action? Your weaponry comes in a group of four – meat, cooking method, wood smoke and your BBQ sauce, marinade or rub. Quick FYI, nothing is set in stone here. These are just some basic principles and American style BBQ tips to help you on your way. 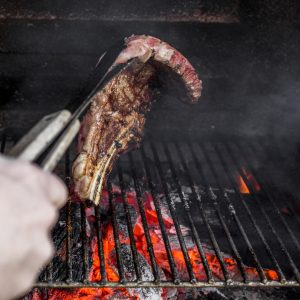 As we now know, your meat selection will be determined by your choice of regional American BBQ style. Carolina, Memphis or Kansas style means picking up a portion of pork, specifically pork ribs or shoulder for pulled pork. Taking a trip to Texas? You’ll be buying that brisket cut from the lower chest of the cow.

Right so that’s the meat and regional style chosen, what’s next? The most important part of the puzzle – the cooking. This will determine melt in the mouth from throw in the bin if you get what we’re saying. There are two main techniques to choose from, hot smoking and smoke cooking.

For those seeking the absolute authentic American BBQ experience, hot smoking is the way to go. This involves cooking the meat over a wood fire with indirect heat at lower temperatures between 120°F and 180 °F (50 and 80 °C). This is proper low and slow with cooking times taking anywhere between 4 to 18 hours depending on your choice of meat and personal cooking preference. It is a long process, but once you start it’s mostly a simple waiting game with minimal intervention.

If patience isn’t really your thing then smoke cooking is the way to go. This technique delivers all that smoky American BBQ flavour within 2-4 hours.  Smoke cooking involves cooking your meat over a charcoal fire with wood chips, using indirect heat at higher temperatures of 250°F (121°C) ±50°F (±28°C). This method is great for newbies to the grill game and those planning an American grill BBQ cook out within a shorter time frame.

We’ve knocked on wood countless times in the Big K blogosphere. So by know you should know the drill. Just to refresh once more, different woods have different characteristics, meaning different smoke types leading to different flavours infusing into the meat.  The wood smoke is what separates smoking from just standard grilling.

Strong and smoky – Head for the hard woods such as mesquite, hickory and oak.

Soft and sweet – Get your hands on maple, pecan, alder and fruitwoods such as pear, apple or cherry.

In case you are still a little unsure on which wood or woodchips to use, stronger flavoured woods are mostly used for beef and pork dishes. Fish and poultry pair better with the slightly sweeter woods.

On one level choosing between these three is like opening a can of delicious worms, meaning that there are literally so many amazing options and flavours to choose from. American BBQ sauces range from peppered vinegar and tomato-based, to molasses or mustard. The world of rubs is just as varied with infinite mixes of herbs and spices.  Finally marinades and brines come in all forms and flavours, offering different degrees of penetration depending on the type relative to your meat choice. Sounds complex? Well have no fear. Check out our deep dive into rubs, marinades or BBQ sauce and school yourself. 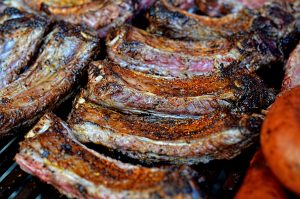 Now we wish that everyone had hours and hours to cook low n’ slow but sadly this isn’t always the case. That doesn’t mean you should miss out. So we’ve put together a quick cheat recipe for you. Spoilers – this isn’t a full in depth recipe. Rather it’s a brief overview to get you going. You can tweak quantities and the other details according to your preference. Hungry for more inspiration? Treat your eyes to this BBQ short ribs recipe or a tender barbecued back ribs dish.

1 – Choose and prepare your pork ribs

Basically you have a choice between baby back or spare ribs.  You’re looking at about a half a kilogram serving per person here. Make sure to remove excess skin flaps on the bone side of the rack as well as any bone, cartilage or fat above the rib section. Then flip the rack over and remove the thin membrane covering the bones.

2 – Apply your dry rub to the meat

When it comes to American grilling, this is where that additional level of flavour is born. Sprinkle a generous amount of rub on both sides of your rack and rub it into the meat. Place the ribs in the fridge and let them sit in the rub for anywhere between 30 minutes to overnight depending on the time you have available.

As we know, it’s all about low and slow. So get your charcoals nice and glowing hot with a thin cover of ash, then push them over to one side of your barbecue. The empty space will be your indirect heat zone for low and slow cooking. Also make sure to spread a little oil over your grill to ensure that your ribs don’t stick. Sizzling side note here on charcoal, you should be looking for a steady burn producing continuous heat for about 1.5 to 3 hours. If you are fairly new in the game we would suggest our Lumpwood Charcoal as it’s made from 100% natural lumpwood, easy to light and delivers consistent heat. For the more experienced grillers out there, pick up a bag of Dura Restaurant Grade Charcoal. These fiery customers are cook ready in 30 minutes, offering consistent heat output for a BBQ blazing 3 hours.

It’s so easy – soak your woodchips in water for about 2 hours before you start grilling. When you are ready to begin, add the moist wood chips onto your charcoal pile. This will add the smokiness to the indirect heat created. Looking for some strong smoky goodness? You can get up close and personal with our hickory woodchips right here.

Add your ribs to the grill bone side down. Then close the lid and leave for between one and two hours. We know it’s hard but try not to keep removing the lid to check your progress. This will disturb the perfect smoky, low and slow heat environment needed for optimum succulence.

How do you know when your ribs are done?  The heat holds the key. Place a heat thermometer into the ribs ensuring not to touch the bone. Ribs cook to an internal temperature of 160°F (72°C) so if you’re hitting that temp, the nom nom is on.

20 minutes before serving, slather and smoother your BBQ sauce all over your ribs. Done and done.

With all this new knowledge at your disposal, you will never have to sit on a rock, ponderously scratching your chin asking yourself, ‘Where can I find authentic American BBQ ideas?’ If your BBQ needs some whoa, it’s time to cook low n’ slow. We’ll see all you lovely people next time.